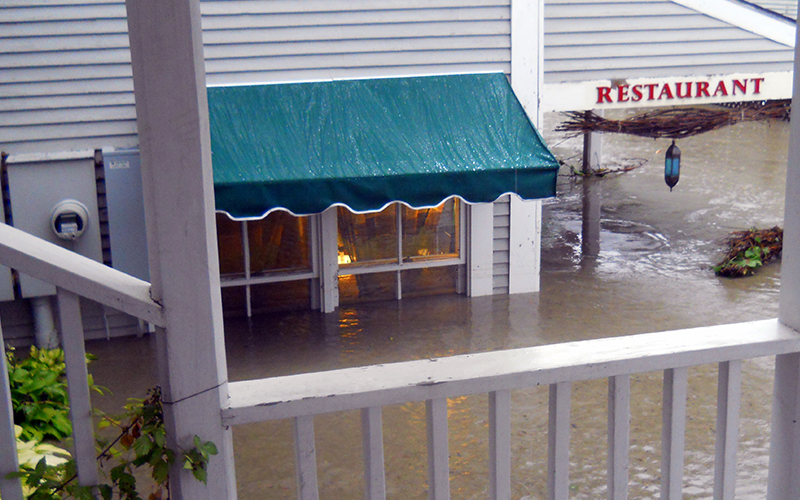 It’s been 10 years since Tropical Storm Irene brought destruction and damage to The Valley and Vermont on August 28, 2011.

The storm, which was downgraded from a Caribbean hurricane, made landfall in the Outer Banks of North Carolina before moving north to Virginia, New Jersey, Brooklyn and Vermont where it lingered for 12 hours.

Irene came through The Valley first with steadily increasing rainfall and later winds. Rainfall estimates ranged from 6.45 inches at a measuring gage on Waitsfield Common Road to 5.7 inches on Center Fayston Road. The flooding that hit Vermont either equaled or surpassed the flood of 1927, depending on which stream gage was used.

Flood stage at the USGS. stream gage on the Mad River in Moretown is 9 feet. On August 29, the water crested at 19.06 feet which is just shy of the 19.4 feet recorded during the flood of 1927. Some reports had the river cresting one-eighth of an inch higher than in 1927.

The inundation on Bridge Street was severe, destroying the former barber shop that used to be between the river and the blue building that houses Peasant now. Flooding caused extreme damage to the former MINT restaurant, the Green Cup, The Artisans’ Gallery and it destroyed the studios of Mad River Valley Television among other businesses.

In Warren, Tracks at The Pitcher Inn was flooded and a home on North Fayston Road was destroyed. Many, many homes in Moretown Village were flooded and that damage was worse in Waterbury where homes as well as state of Vermont offices were damaged and destroyed. The Moretown town office was so badly damaged that it had to be torn down and rebuilt.

Beyond damage to property, crops and fields, local and state roads and culverts were hit particularly hard during the storm. The Route 100B bridge over the Mad River was so severely damaged that it was closed, reopening some weeks later for two-way traffic, but then four years ago, made into a one-way bridge until it could be replaced last year. In Duxbury, the Dowsville Bridge was washed away.

Every river and stream in the state had flooded and parts of Hancock and Rochester were completely cut off to the north, south, west and east. The village cemetery in Rochester was damaged by the storm with coffins strewn along the way of the flood waters. The Sugarbush snowmaking pond dam was breached and the Warren Fire Department had to rescue four people lost in the woods near the southern end of Plunkton Road who lost their way when they set off on foot after being unable to get around a washout on Route 100.

Schools had been scheduled to reopen the next week, but that was pushed off a week to accommodate recovery work.

Have a memory to share about Tropical Storm Irene? A lesson learned? Something to think about? Send those to news@valleyreporter for next week’s issue which will focus on how The Valley and Vermont recovered and how the community has and continues to work on flood resiliency.