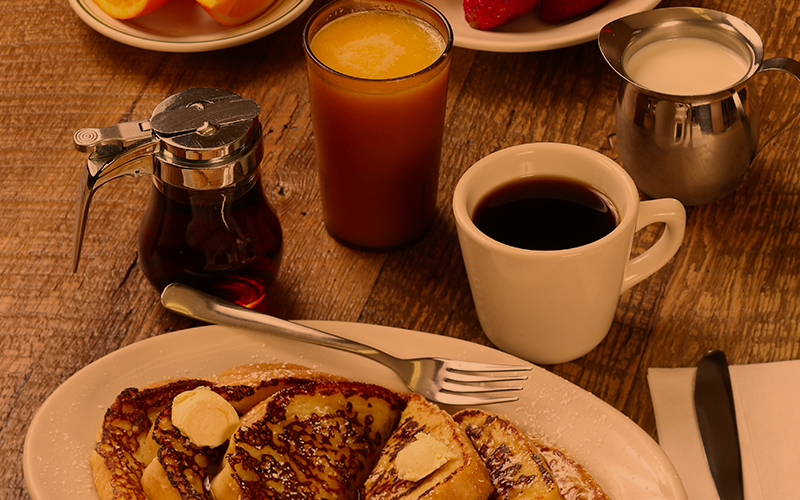 On Monday, August 23, local residents were enthusiastically greeted by Nancy Emory, president of the Mad River Valley Seniors board, and volunteers at Evergreen Place’s weekly breakfast in Waitsfield. The event is open to community members and serves classics like corned beef hash, omelets and pancakes, along with coffee and juice, for a suggested donation.

Fred and Vikki Mead are regulars at the weekly breakfast and have lived in The Valley since 1980. Skiing brought them here from upstate New York. “It’s the perfect place to live,” Vikki said. “We’ve had a lot of fun,” Fred added. Fred transferred to the state for his repair and serviceman position at the National Cash Register and they raised their two kids in The Valley. In addition to skiing, the Meads are avid sailors and enjoy sailing on Lake Champlain. “When we drove around looking for a place to live, we liked this area hands-down,” Mead said.

Al Uris, Waitsfield, another Evergreen breakfast regular, is a retired lawyer-turned-writer. He has been involved with the Burlington Writers Workshop for nearly a decade and is a regular attendee at their weekly meetings. He has had stories and essays published in the workshop’s anthology, as well as The Mud Season Review, a literary magazine founded by the group. He was a lifeguard at Jones Beach on Fire Island, NY, for 48 years, where he met his wife. He first moved to The Valley in 1970, moved away in 1984, then returned. He has served as a justice of the peace in Waitsfield. His daughter lives in The Valley and his grandson attends Harwood Union High School. Uris is at work on a novel about pilots in WWII, which he called “the last good war.”

Uris was joined by Tom Emory, who is married to board president Nancy Emory. He serves on the Mad River Rotary and is treasurer of Sugarbush Soaring. He has been a pilot since 1962 and is passionate about encouraging Sugarbush Soaring’s youth program, which he said teaches responsibility in addition to flying. He and his wife have been around The Valley since 1986 and moved here full time in 2008. “It’s a friendly place, easy to get involved in a lot of different things and make a difference,” he said.

The breakfast was well-attended with nearly a dozen people ranging from their 40s to their 80s laughing and sipping coffee. The breakfast takes place at Evergreen Place every Monday from 8 to 10 a.m.