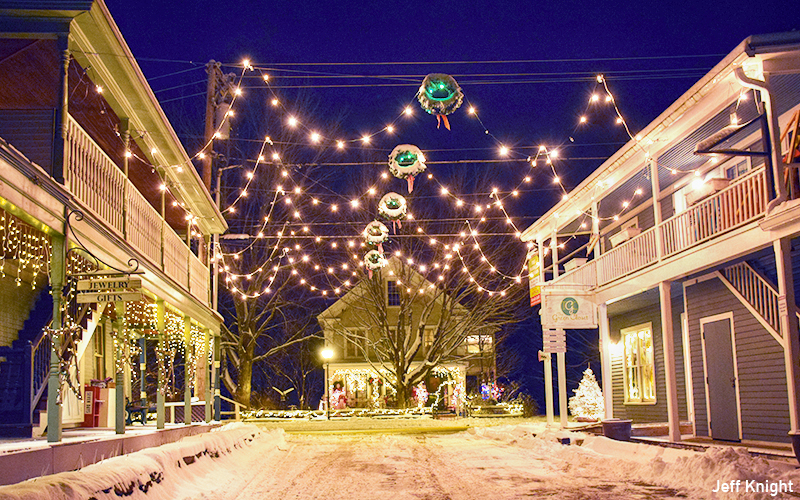 Bridge Street in Waitsfield Village was particularly hard hit by Tropical Storm Irene which brought over 6 inches of rain to The Valley on August 28, 2011, leaving mud- and water-filled buildings and basements in its wake.

MINT Restaurant, located in the old Waitsfield House on the corner of Main Street and Bridge Street closed and then reopened after the flood, only to close several years later. An art gallery on the ground floor of that building was flooded and did not reopen. The Mad River Valley Chamber of Commerce now occupies that space.

Liz Lovely had been about to open a retail sweet shop in the building that now hosts the Green Closet – that business did not open and Cheap Thrills reopened but then closed. The Artisans’ Gallery and Bridge Street Emporium were both flooded. The gallery reopened and the emporium did not.

The basement of the Joslin Memorial Library flooded during the storm. At the time it was home to the Waitsfield Town Office. Town staff and others were able to move files and computers up off the floor and shut the land records vault, minimizing damage. Waitsfield subsequently pursued grant funding and loans to build a new town office further north on Main Street, out of the flood plain.

At All Things Bright and Beautiful on Bridge Street, the basement flooded and the force of the flood waters washed away the beautiful perennial gardens of proprietors Gaelic and Bonnie McTigue. Their driveway was also washed out. Next door at the Madsonian Museum, the basement flooded but did not damage the building itself.

Beyond Bridge Street, quick thinking on the part of Deb Jones helped prevent damage from flooding on the ground floor of the building she owns on Dugway Road south of the village. At the time Alteris Renewables rented the space. On Sunday as the rain fell she was able to get all the Alteris equipment out or on higher ground with the help of Alteris employees. The morning after the storm, she and her mother, Gussie Graves, removed the mud, cleaned the walls, got the carpeting out, dried out the building and moved the Alteris furniture and equipment back in so that those people could work on Tuesday.

Further south, American Flatbread took a severe hit from the storm and with the help of hundreds of community volunteers – including Green Mountain Valley School students – was able to reopen on Friday, September 2, five days after the flooding.

Further south in Warren Village, the lower half of The Pitcher Inn filled with water and then quickly filled with volunteers to help with the cleanup. The water inundated the lower floor through the French doors and continued into the wine cellar where $100,000 worth of wine was destroyed. The Pitcher Inn reopened later in the fall and remains open.

To the north in Moretown, the town office was destroyed and the town’s land records were badly damaged. Moretown ultimately abandoned that office and built a new town office nearby on higher ground. Several homes in Moretown Village were damaged and were subsequently cleaned up and rebuilt.

A single-family home near the bottom of North Fayston Road was flooded and destroyed along with a home on the Mad River just north of Warren Village. That Warren home was not rebuilt and the site is now a town park providing river access. The former Frank Lovett barbershop on Bridge Street immediately west of the covered bridge was moved off its foundation and was not rebuilt. At the time it had been a photography studio. It is now a public park.

Farm fields from one end of The Valley were damaged by the storm with crops destroyed and streambanks washed away leaving trees and other debris on the fields. They have all recovered and continue to operate. The Sugarbush snowmaking pond in Warren took a direct hit when the Mad River breached the dam on the south side of the pond. It took multiple permits and a lot of heavy equipment and the ski area was able to use the pond for snowmaking that ski season.