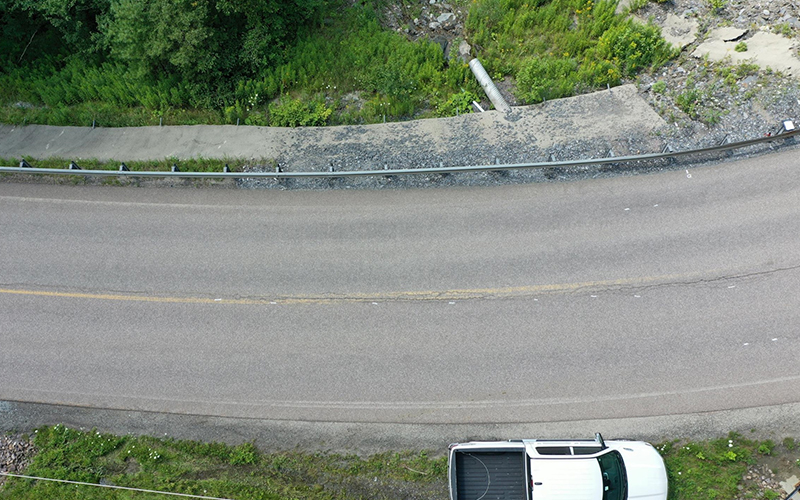 At a September 7 Warren Select Board meeting, Dave Brogan and Lex Ivey of Geographic Stabilization International (GSI) presented a plan for shoring up a section of the Sugarbush Access Road that has been sliding for years, which the select board approved. GSI stabilized the section in 2013 and DuBois Construction repaired the slope a few years ago. Yet, the slide has continued. “It’s still moving today,” Brogan said, noting that the road that had been repaired has cracked.

The goal for the 2013 project was to stabilize the road slide. “The repair has done a pretty good job,” Brogan said, but “It’s time to stabilize the repair.” The landslide is moving down and away, causing cracks in the road. “There’s some pretty big landslides happening,” Ivey said. Run-off is exacerbating the problem, he said. GSI proposes removing 5 feet of vertical soil, protecting the soil nails and reinforcing the entire mass.

This work is part of a warranty repair offered by GSI. Though the five-year warranty on the work done in 2013 has expired, “This landslide movement was happening a year or two into our repair,” Brogan said. “We felt it was an important thing to protect the asset, which is the road.” The 2013 work repaired a culvert and drains and added a guard rail to protect the road. The select board authorized two projects by GSI, with a price tag of approximately $100,000 for excavation and repair work, including on a section of the road that has not yet been repaired where they are seeing slide.

Debris flow from recent storms that caused damage to the area have caused further slide. Stormwater discharge has been coming over the culvert on the roadside and causing erosion of the slope. Tension cracking is starting to form in the roadway and Brogan said the rest of the slope could start to move. “The work we do is not going to stop the slide,” he warned. GSI proposes stabilizing an additional 50 linear feet to curb the slide, which he said impacted about a mile-long stretch of road. “It’s going to be important to monitor the road,” he said. They said that they would need to take images using a drone to collect data at least once a year, though the plan for monitoring those data would become clearer once those images are taken.

Ivey and Brogan estimated it would take $13,000 to collect the data needed using lidar, a method for using lasers to determine ranges, and likely $3,000-5,000 to analyze it, which the select board also approved. “We will know once data is collected how much and how often monitoring is needed,” Brogan said. He also said that the town should talk to stormwater experts about the stormwater discharge and how to manage it. He stressed that it is important to keep the ditches on Sugarbush Access Road clear to mitigate further damage.