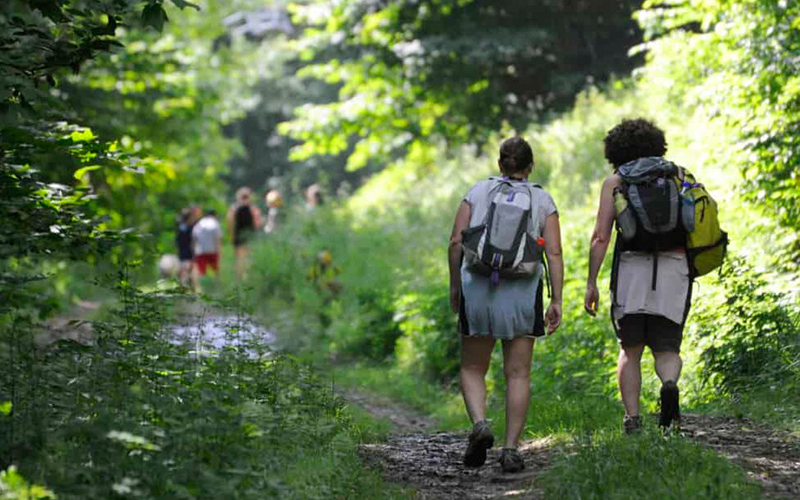 Members of the Mad River Valley Trails Collaborative are working with conservation commissioners from local towns along with other community organization members to talk about how to work collaboratively to ensure that the values of recreation and stewardship of the land can be appropriately balanced.

But a lot of the real work of the meeting, which was held under the pavilion at American Flatbread, was a discussion about community trail visioning and planning for outdoor recreation and environmental integrity.

Waitsfield Conservation Commissioner Phil Huffman opened the discussion by noting that conservation commissioners from the three towns had been discussing these issues with Friends of the Mad River (FMR) for a few months.

Huffman said he wanted to update people to a number of themes and projects that have been unfolding for more than a decade after the original Mad River Valley trails summit in 2010.

“In talking about this this summer, we fleshed out our thinking to a point where it felt right to bring this to the broader circle,” he began.

He noted that there’s an opportunity to engage now and take the next steps in the ongoing conversation about how to make the most sustainable trail network that capitalizes on all the benefits the trails provide for people, outdoor recreation, fun, fitness and well-being as well as economic development and creating a sense of place.

That work centers on how to capitalize on all the aforementioned items, he said, while sustaining the ecological health and integrity of The Valley in terms of wildlife habitat, water quality, flood resilience and more.

“We, as a Valley, have an opportunity to further the gold standard for striking a balance that balances environmental integrity and maximizes recreation, given our history of great work and collaboration, the progress we’ve made and the social capital we have. We have the opportunity to do something here that will serve as a model for other places,” he said.

He referenced a couple of recent situations where trail development was being proposed that was routed through wild ginseng in Warren, and another where trails were proposed in Phen Basin in Fayston. In both cases, he said, if there had been more dialog between those proposing the trails, FMR and the conservation commissions they could have been avoided.

“Earlier engagement and sharing information can help head off friction and potholes along the way,” Huffman said.

To that end, he proposed that the group consider some short, mid-term and long-term goals for “broader, collaborative dialogue.”

Short-term goals include enhancing dialogue and collaboration between members of the trails collaborate, the conservation commissions and FMR, taking it to another level and sharing information that towns have about ecologically-sensitive areas and places to avoid in trail siting.

Mid-term goals, identified at 2022, could include a follow-up on the MRV Moves effort from over a decade ago, undertaking some broader, Valley-wide visioning and planning for trails that takes a step back and looks at where trails can best be built for all users and where ecologically-sensitive areas are found as well as where there are places that should be left untouched for those who want to be in the woods without trails.

Long-term, Huffman said, the goal would be to institutionalize all of this as much as possible with enhanced and more frequent interaction between groups, improved dialogue and information sharing that can collectively and individually inform thinking as well as planning.

George Schenk, who serves on the Warren Conservation Commission and hosted the meeting at Amerian Flatbread, warned that the biosphere is in trouble because the human footprint is too large and is threatening wildlife and biodiversity.

“Every time we build infrastructure in the wild, we expand our footprint. We need to be talking about how we contract the human footprint,” Schenk said.

“This creates a very difficult challenge as we’re talking about expanding trail networks into areas that don’t currently have trails. It becomes critically important that any new trails are designed with sensitivity to wildlife and there may need to be some limitations on how and when trails get used,” he said.

Huffman responded emphasizing the importance of developing trails with the best ecological knowledge and working to minimize impacts.

“I sometimes channel Eric (Friedman) and in thinking about our band and who we are in The Valley and stewardMRV and I think part of our brand is our trail network and how we care about this work. That’s the gold standard. We’re working to balance those things that we think are important,” added Corrie Miller, FMR.

Participants broke into small groups to discuss their general reflections on the thoughts that Huffman shared and on ways to improve those thoughts.

The meeting was filmed by MRVTV, including the reports from the small group work. Find it at www.mrvtv.com.