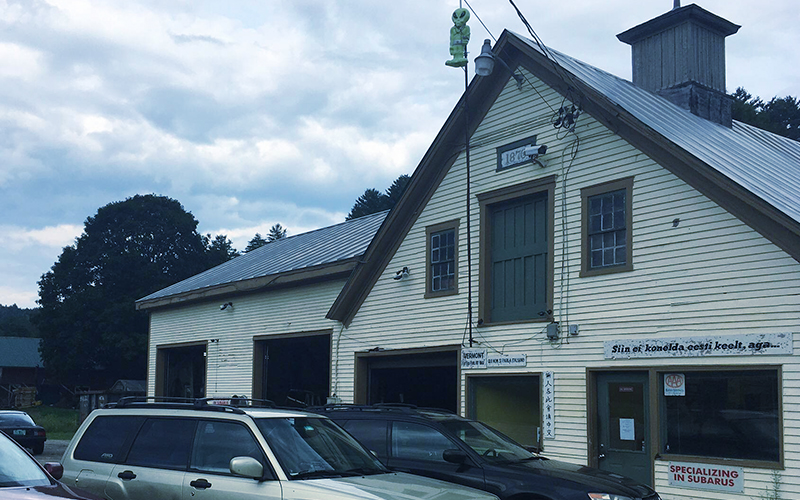 After closing in April, 2021, Hap’s Garage, Waitsfield, has reopened this week, now under the ownership of brothers Allen and Hadley Gaylord. Allen Gaylord is handling the day-to-day business of the service station. The brothers purchased the interest ownerships of their niece Paige Gaylord and sister-in-law Claire Ewald this summer.

“Today is opening day and I’m booked already,” Allan Gaylord said. He and his late brother Walt Gaylord ran the business together for 24 years before he stepped away from it.

Asked by he was back, he said., “I was tired of looking at the four walls of my house. I’m a young man still and I might just as well play out the rest of my life and die here. That’s the biggest portion of it,” he said.

He said that he is starting with two mechanics, Eric Anderson and Natasha Burbank, who worked for Hap’s as an intern while she was at Harwood and then went on to school in Pennsylvania to get a degree in automotive technology.

“She’s going to be great and is also really good with computer systems.” Allen Gaylord said he expected to offer some type of towing service but was not sure if it would be an AAA contract which the station has had in the past.

The phone has been ringing since the business opened its doors on Monday, October 4. Gaylord said he made four to five appointments that morning shortly after he arrived at 8 a.m. Currently a lot of people are making appointments to have their snow tires mounted, he said. Between when the business was closed in the spring and this week’s reopening, Gaylord has done some cleaning and upgrading of the property to get it ready.

Hap’s has been a fixture in The Valley since it was founded by their late father, Hadley (Hap) Gaylord, in 1958. Hap Gaylord ran it until 1983 with Walt taking it over at that time.

“It got to be winter and he couldn’t handle it by himself; he asked me if wanted to help him out. I got out in February of 2012 and after that he had a stroke in 2013. When I got out, he bought out my half of the business, but he didn’t buy out my half of the garage/land,” Allen Gaylord explained. After Walt Gaylord died in October 2019, Ewald and Paige Gaylord ran the business until this spring when Hadley and Allen Gaylord purchased their interests in the business.