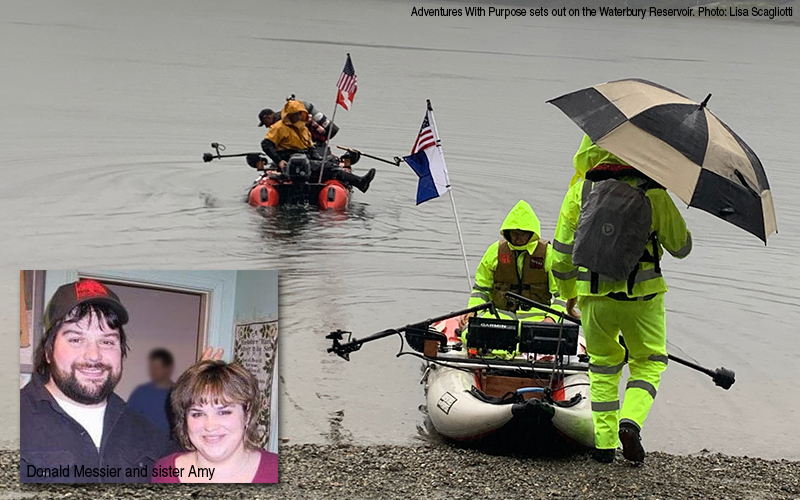 After the occupants did some laundry at the laundromat on Park Row, they headed to Little River State Park. In the midst of a 19-state cross-country trip, the four-man team hauling inflatable boats, sonar equipment, television cameras and an assortment of tools and gear arrived to spend their afternoon hoping to solve a 15-year-old local mystery.

They set out in two boats from the boat launch in view of the Waterbury Dam under a gray overcast sky in a steady rain eager to see if their equipment would locate a possible target the size of a Ford 150 pickup truck.

Because that was the type of vehicle that 34-year-old Donald Messier was driving the night of October 14, 2006, when he went to a party in Waitsfield and never was heard from again.

Messier, a Waterbury native and employee at the Green Mountain Coffee Roasters downtown plant at the time, was last seen in the early morning hours of October 15, 2006, when witnesses told investigators they believe he left the get-together on Main Street attended by some 50 or more people.

He didn’t return to his sister’s home where he was living at the time and he didn’t show up for work on Monday. His family reported him missing to the Waterbury Police Department who turned the case over to the Vermont State Police.

By October 18, state police issued a press release alerting the public to their latest missing person case. In early November, a follow-up public notice appealed to hikers and hunters in the woods to be on the lookout for Messier’s red 1997 Ford pickup with the license plate BGG890 and several NASCAR stickers on the back window.

In the midst of a divorce, Messier was in treatment for depression, according to his family members. One scenario that investigators floated was that he might have decided to take his own life and perhaps chose a remote spot – even a body of water such as the Waterbury Reservoir – to do so.

“He was still down in the dumps” about his divorce, said his sister Amy Currier. “Who wouldn’t be? But he was making jokes, talking with us about the future and making plans.”

He was seeing a therapist who expressed surprise at the suggestion Messier had chosen suicide, Currier said in an interview this week as the anniversary of her only sibling’s disappearance approached. “I never really bought [suicide] as the story.”

Fifteen years later, however, family members are pragmatic in their outlook. “We all know the likelihood of him coming home alive is fairly slim,” Currier said, adding that some friends hold out hope that Messier is leading a new life somewhere else and intentionally cut all ties to home.

Currier doesn’t buy that scenario either. Not long before his disappearance, she recalled how her brother sat up all night beside his dying grandmother’s bedside. “His family was his world,” she said. “He wouldn’t have left his family” without a goodbye.

The state police early in the investigation assembled a team to search the reservoir to no avail.  Family and friends pursued what they thought was a more plausible theory that post-party Messier in his truck simply went off a dark road accidentally. With hope of finding him in his truck down a bank, they methodically searched what became hundreds of miles of rural roadsides over months.

In the years that followed, police say they have received various tips, but none that have led them any closer to solving the mystery of Messier’s disappearance. His family members say there never was any activity on his cellphone, bank account, credit card or even his social.

Vermont State Police Lt. John MacCallum oversees missing persons investigations and said this case is one where anonymous tips have run the gamut including suggestions to search specific properties in the area. The trick is trying to determine if the tip is credible, he said. Searching private property would require establishing probable cause to believe something could be found MacCallum said.

As for saying whether or not investigators suspect foul play, MacCallum said there’s not enough to go on. “We don’t know what happened to him. We don’t have information to say he was a victim of harm or to say that any other possible theory is valid,” he said. “Evidence is all still lacking.”