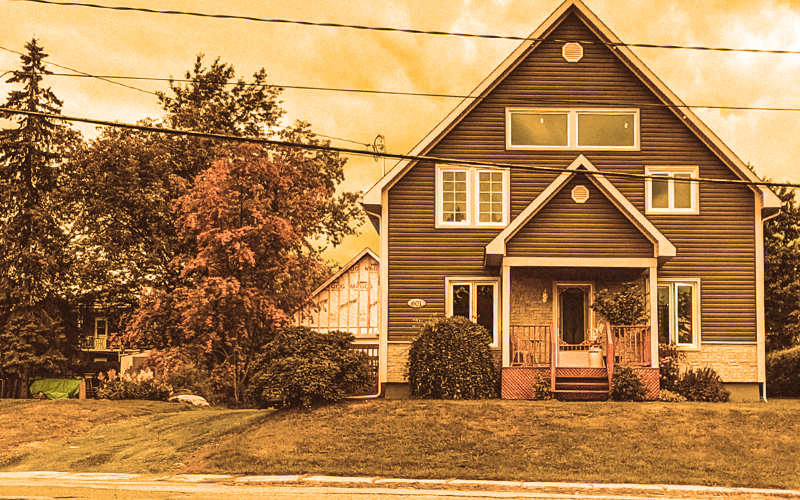 The Mad River Valley Housing Coalition (MRVHC) is incentivizing homeowners to add accessory dwelling units to their homes as a way to help ease housing shortages.

The incentive comes in the form of a grant of up to $10,000 to help defray construction, planning, permitting and other costs associated with the effort. Those who accept the grants agree to maintain their new apartments as year-round housing for five years. The Mad River Valley Community Fund (MRVCF) is financing the grant program.

WHO IS BUILDING ADUs

Already, several homeowners have taken advantage of the grants and some are going ahead without the grants, building small apartments attached to, within or near their primary residences. With this report, The Valley Reporter begins a look at who is building these accessory dwelling units (ADUs) and the particulars of the how and the why.

First up, the Baruzzi residence on Nelson Farm Road in Fayston where Rebecca and Eric live with their son Pete. Full disclosure -- Rebecca works for the MRVCF as the program director.

“The prior owners put on a bonus room basically creating a double dining room and a double living room,” Rebecca Baruzzi explained, about the space they reconfigured to create a 600-square-foot apartment within their house.

They started by working with Kaziah Haviland-Montgomery, a consultant with the MRVHC, to understand the process. She walked them through the steps they’d need to take with the Fayston Development Review Board as well as a Nelson Farm Road road association.

Karl Klein, president of the MRVHC, said that adapting septic systems is generally one of the most expensive parts of building ADUs.

The 600-square-foot apartment the Baruzzis built represents about 30% of the square footage of the house. Each town has its own specific requirements about how ADUs are built and how big they can be.

While the Baruzzis were originally considering building a second-floor walkup, they hired Haviland-Montgomery on their own and she suggested they create a two-room apartment on the first floor of the house which turned out to be less expensive and had less of an impact on the house.

The apartment was created by walling off the spare dining and living room on the east end of their house, without changing exterior walls or doors, simply adding a closet, standing up walls to create a bedroom, bathroom and kitchen/living area within the existing envelope. They doubled down on the insulation in the wall that their kitchen shares with the apartment and then in the apartment built a clothes closet along that same wall for further sound dampening.

The apartment has smaller apartment-sized appliances, including a stackable washer/dryer and a front and back door. It will rent for $1,000 a month and was already rented before it was completed. They are renting to a friend with whom they are comfortable sharing space, Baruzzi said. They are also carving out space on the second floor of their detached shed for their tenant to store things like skis, snow tires and bikes.

It is heated with a heat exchange unit, but when it’s really cold, the apartment is still connected to the central heating from the main dwelling’s pellet stove.

Baruzzi said that Eric was able to do most of the work himself which kept costs down.

“Permitting and us deciding to go forward with the plan took us six months. Eric turning to and doing all the work took probably six weeks. All the work was internal to the existing house. It involved retrofitting the rooms and adding a kitchen and bathroom. He did the sheetrock, cabinets, bathroom. We had Ward’s come do some plumbing, the toilet heat exchange,” she recalled.

She said that ironically, apartment-sized appliances are more expensive than full-size ones. Permitting and architectural work came in at $3,000, appliances at $3,000, bathroom shower stall at $2,500. But, she pointed out, they opted for higher end fixtures and appointments in the kitchen and bathroom.

Klein said that the type of work the Baruzzis did in creating their ADU is the least expensive option and said that a space under 1,000 square feet could typically be constructed/ converted -- excluding the cost of septic – for $25,000-$50,000.

“Retrofitting a space like the second floor of a garage or barn would add the costs of insulation and drywall, maybe another $10,000 or $15,000, plus maybe a Rinnai heater for another $1,000,” Klein said.

“Obviously, stick building an ADU from the ground up is going to be the most expensive way, especially during the current construction climate. Building a 500-square-foot ADU, at $250 per square foot would cost $125,000,” he added.

Building an ADU? Already built one? The Valley Reporter would like to interview people who have built or are building ADUs. Please reach out via This email address is being protected from spambots. You need JavaScript enabled to view it. or call 802 496-3607 and ask for Lisa Loomis.