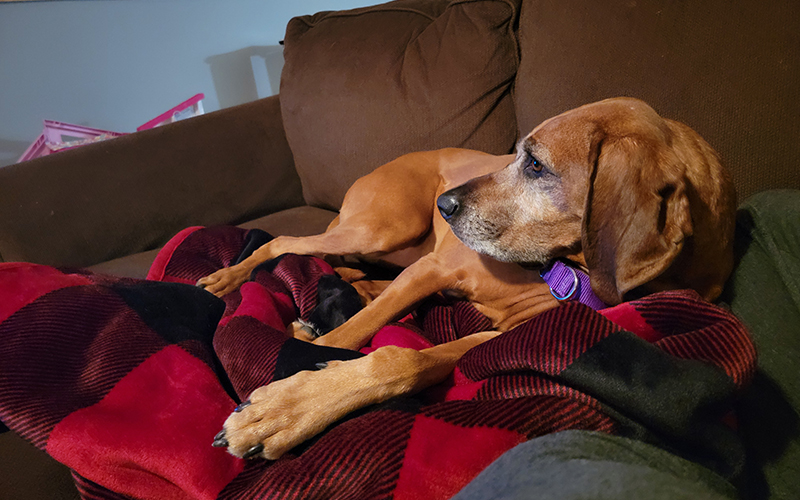 Ellie, a six-year-old hound, needed a new home. Her owner had to surrender her due to a new housing arrangement that prohibited pets. “Housing is the number one reason people have to surrender dogs,” Central Vermont Humane Society director Erika Holm said. When Central Vermont Humane Society (CVHS) took Ellie in, she had “pretty significant separation anxiety” and was “very people-oriented.” Ellie spent six weeks in the Barre shelter. “Everybody here fell in love with her,” Holm said. In December, Ellie found her forever home with a new family. “They just adore her,” Holm said. “She’s settling in, fitting in quite well.”

Peaches, a stray found in St. Albans last year was in “really bad shape,” said Melissa Goldberg, a volunteer with local shelterless adoption agency For Love of Dogs (FLD). Peaches was covered in sores and had maggots in her wounds. They began treatment and rehabilitation. “She is an amazing dog, very healthy now and in a fabulous home,” Goldberg said.

FLD adopted out 800 dogs in 2021 and currently has 32 available to adopt. In a typical year, they’d adopt out approximately 200 dogs, but have been extremely busy in the pandemic. “Dogs are super in demand,” Goldberg said. “Most of our dogs come from the south. We also do local rehoming.”

Some of those 175 dogs in 2021 were transferred to other shelters, while some were euthanized due to severe medical or behavioral conditions. The rest are still at the shelter in Barre. “Surprisingly, this was not hugely different for dogs than in 2020 or previous years,” Erika Holm said. “When the pandemic first hit there was a huge decrease in surrenders,” she said. “We got slammed with people wanting to adopt animals. They were home and it was a good time to take animals in.” She said they couldn’t keep up with the demand for pets.

“In the past, we’d take in more animals from out of state when we had space,” Holm said, typically about 30% transported from the south, and 70% local. During the pandemic, transports from out of state were put on hold. With people at home and a moratorium on evictions, far fewer people were surrendering their pets. Evictions and moving to situations that do not allow dogs is a major cause of dogs being surrendered. During the pandemic, Holm said there has been “a huge desire to get more pets into the home” and said there’s an imbalance in number of dogs being surrendered or otherwise up for adoption and those wanting to adopt.

The rush to adopt has brought behavioral issues in many dogs, Holm said. “People were getting dogs they knew nothing about. We spent a lot of time helping people find training or other resources.”

CVHS has been offering curbside adoptions, where people don’t enter the building and meet the dog in the yard. They do prescreening over the phone to find out what people are looking for in a pet and whether they can meet that individual dog’s needs. They give a two-week window for the animal to settle in and adjust. She said they’ve seen a reduction in dogs returning. “The animals are so much healthier,” she said; “there’s less stress of visitors.”