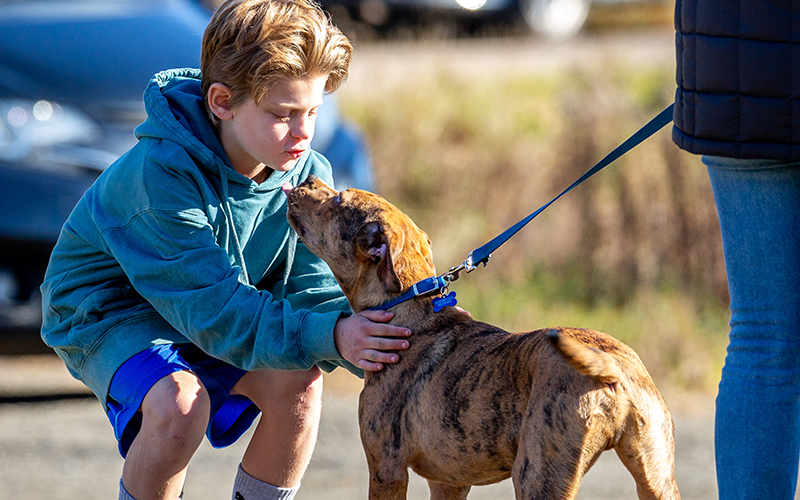 A couple of times a month, a transport van carrying 20-30 puppies and dogs arrives at the fire station in Middlesex where volunteers from For the Love of Dogs Vermont (FLDV) are on hand to introduce families to their new four-legged friends and introduce dogs and puppies to their new families.

Volunteers with FLDV are good about taking pictures of these introductions and posting them on social media where it’s hard to miss the excitement and the joy and in some cases the uncertainty.

Warren resident Sue Andrew has been volunteering with FLDV for several years. On the day when the dogs and puppies are to arrive after their two-day trip from the south, their new families are given staggered pick-up times, she said. The transport van pulls into the fire station and the garage doors are shut. This gives the southern dogs at least some protection from the elements if it is winter.

“They’ve gone from 80 degrees to 25 degrees in two days. We bring the families in, one at a time to get their dogs collared and leashed, get them their paperwork, take time for pictures and then send them out to go potty and go home,” Andrew said.

Andrew said that it can be pretty exciting when the dogs arrive, particularly for kids waiting to meet a new puppy. Puppies usually evoke the most emotion, she noted.

While puppies come out with their tails wagging, the grown-up dogs are often stressed out by the transport and can be shut down, shy, scared and nervous.

“We ask those adopters to give their dogs decompression time and let them know that it might takes days or weeks for the dogs to be comfortable in their new homes. A lot of these dogs are what we call yard dogs -- they’ve lived their whole lives in a yard. Often, they are not housebroken so it’s like raising a puppy,” she explained.

She said that FLDV is always concerned about how well dogs will acclimate to their new homes. She talked about Bebe, a blind Great Dane who was placed in New Hampshire and for three weeks had to be separated from the other dog in the house because she was extremely aggressive. Then – a corner was turned and Bebe was chasing her sighted sibling around the yard in the snow.

Jen Bennett, Warren, another FLDV volunteers knows Bebe and has met her. Bennett recently adopted a puppy through FLDV and that dog, a 4.5-month-old goldendoodle, named Mulligan, was transported with Bebe. The family that adopted Bebe, she said, “are doing God’s work.”

Bennett lost a beloved dog last year and planned to wait until this summer to rescue a dog. Her plan was to a rescue a dog (not a goldendoodle like the dog she lost), not a puppy and not a male dog, she explained as she sat in The Valley Reporter office with her exuberant 4.5-month-old goldendoodle puppy. FLDV rescued Mulligan from Alabama where his original owners surrendered him for unknown reasons.

Bennett picked him up in New Hampshire and said that the experience of meeting him was intense.

“You’re meeting a member of your family for the first time. He was so sweet. He came running over to me and gave me a kiss. And it’s a little scary – you really don’t know what you’re getting,” she said.

Bennett volunteers for FLDV, taking pictures of families when they meet their dogs and puppies in Middlesex. That experience, she said, is also intense.

“The dogs can be a little stressed out because of the transport, there’s a lot of barking. They come out and you can see them looking around and then they’re handed to their owners. Lots of people take them outside into the field and that’s when you can see them really connect and made eye contact,” she said.

Sarah Morrison, Fayston, and her family adopted a Lab/cur mix through FLDV in November. Her name is Maple. Her husband picked up the dog in Middlesex and brought her to Mad River Glen where they were doing a ski patrol refresher.

“She was closed down when he picked her up. She was timid. She came right into the ski patrol refresher and laid in the sun,” Morrison said. Maple came to Vermont from Louisiana.

Maple came home and met River, the family’s 1.5-year-old black Lab COVID puppy and it didn’t take long for her to come out of her shell. Now she and River romp off leash in the fields near their home with their humans.

Morrison praised the work of FLDV, the volunteers and the drivers, “These are amazing people that travel these huge distances with all these animals.”