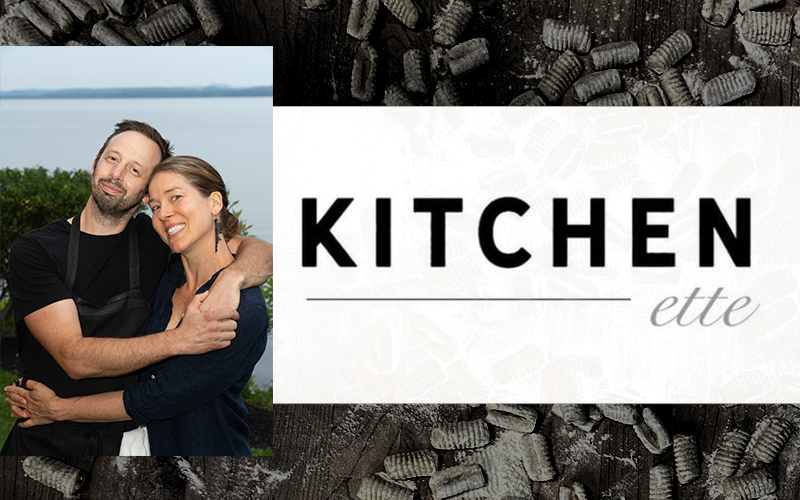 Warren residents Adam Longworth and Lorien Wroten will be opening Kitchen-ette in Irasville Common in Waitsfield next week, offering prepared meals for takeout, to start, but with plans to add more offerings in the coming weeks and months. The new takeout kitchen is located in the. former La Patisserie space.

Longworth and Wroten are fixtures in The Valley’s food and beverage scene, having moved to The Valley in 2010 to take over the former Common Man Restaurant in Warren. They came to The Valley from storied restaurant careers in New York City.

They ran the Common Man from 2010-2018 and then entered into a few years of entrepreneurial creativity to get to where they are today. When they left the Common Man, Longworth returned to projects in NYC after a brief stint at The Pitcher Inn, where Wroten stayed on a bit longer as a general manager.

Both had a previous history of working at the Round Barn, Waitsfield, that stemmed from a summer of working there as a trial run before deciding The Valley was where they wanted to be.

“When the Donahues took over the Round Barn, we were five to six years into the Common Man and we’d really begun to understand the seasonality of our business and theirs in terms of when we both needed people and staffing. Our needs were pretty much the opposite, we needed the strongest team in the winter and they needed the strongest team in the summer so we shared staff while we had the Common Man. When we finished with the Common Man, we both helped at the Round Barn.

Then COVID hit and while Wroten had a project in the city, that was shelved, and Longworth, who’d been traveling back and forth, ended that as soon as possible.

“COVID sealed that deal. We were ready to be here for good. I picked up multiple projects and we both had various jobs at the Round Barn, but we were really working on developing what our next thing was going to be,” Wroten said.

Kitchen-ette is what that next thing turned out to be.

“Our original plan in coming to Vermont was to do something small that was more sustainable to the Vermont lifestyle – and we end with a full-service restaurant at the Common Man which was not small, but it was a necessary part of our journey,” Wroten explained.

As they worked their way through culinary projects and side gigs, they were also working on their vision for how this new venture would work. They wanted it to be small and flexible, giving them the ability to have a community kitchen that could serve the public, but also provide some catering, pop-up events, private dinners and even offering a few prepared items for people to stop by and pick up to stock their home freezers and cupboards.

“We’re really excited, we’ve been doing large scale restaurant work for a really long time. This is going to be an expression and reflection of what we’ve always wanted to do for a long time. The scale of it will let us be more creative and express ourselves on a smaller scale so that we can engage and interact with the community and also with the community’s food producers in a more collaborative way,” Wroten said.

But the first step is going to be weekly prepared food that people order online from the website (kitchen-ette.com) and come in to pick up, hopefully as early as next week. Final health inspection walk-through took place this week and Longworth and Wroten were ordering food, prepping and getting ready to start cooking.