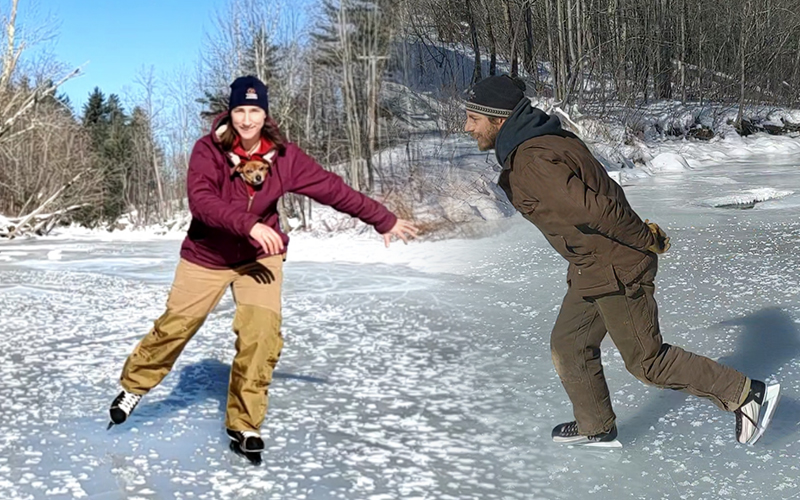 To paraphrase Joni Mitchell, Sarah and Andrew Spencer did have a river to skate away on (at least a little way) on Saturday morning, January 22, when they woke to find that the ice on the Mad River was thick and smooth enough for them to pack up their dog Chewie and take a few turns on the river north of the Bobbin Mill in Warren.

“We were just south of the Route 100 bridge in Warren and as you get down towards the Bobbin Mill, there was a nice, wide, flat spot right there. We skated back and forth along the river for a while,” Andrew Spencer said.

It was bitter cold that morning and Chewie (a southern-belle according to her humans) had little interest in anything except being tucked inside Sarah’s overalls.

“Earlier this winter, we’d been skating on the Prickly Mountain pond, but we’d been watching the ice on the Mad River. We could see it was 6- to 8-inches thick and the wind had blown the snow off it so you could see if there were any undulations or cracks to avoid,” Sarah Spencer said.

Sarah Spencer said that after she posted about river skating on social media she was contacted by a guy who used to work for her dad, the late Barry Simpson, at the Bobbin Mill, who’d grown up along Route 100 near the river.

“He commented about how when he was growing up they used to go down and run along the river and play on the ice as a kid,” she said.