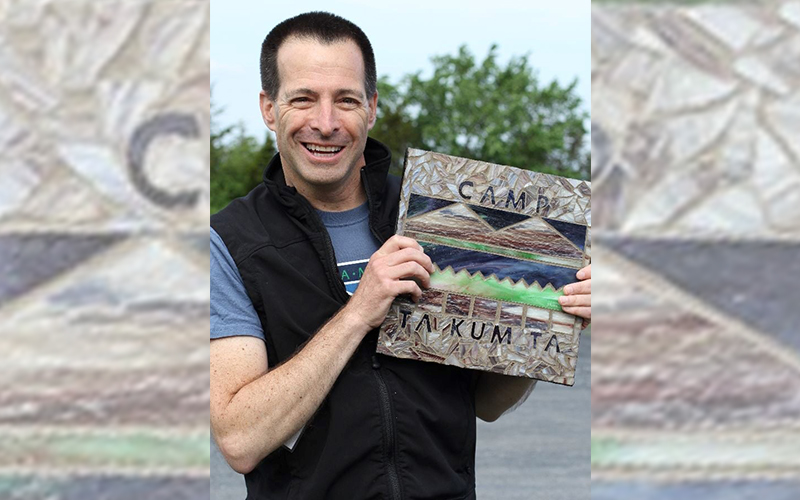 After a decades-long career working in IT for John Hancock, Warren resident Dave Caterino made the transition to nursing and now works as a hospice nurse for Central Vermont Home Health and Hospice.

In that role, he works in The Valley and throughout Central Vermont for the home health agency. On the matter of changing careers from IT to hands-on care for hospice patients and their families, Caterino explained that his first intimate encounter with death was when his sister, who had two young kids, was diagnosed with ovarian cancer in 1988. She died in 1991.

“I ended up being her primary caregiver because no one else in the family could deal with it. My parents were a mess. I was able to provide the one-on-one care with help from my mother who did rise to the challenge as the end got near,” he said.

Then his very good friend and tennis partner Bob Gillen was diagnosed with pancreatic cancer at the age of 49 and Caterino was with him when he died, helping his wife Robbie Chula.

“I was able to do it and it wasn’t easy and I saw the support I was able to give to Robbie and Bob and the family, as a friend. All of these things were building in my mind,” he recalled.

Around 1999, he attended a fundraiser for Camp Ta-Kum-Ta, a year-round camp for children with cancer. He became a part of the Camp Ta-Kum-Ta in 2004, working with pediatric oncology campers.

“I took a very active role in that organization and worked with several terminal kids, including local kids. It showed me that only so many people can deal with death,” he said.

“It takes a realistic point of view to accept that it’s going to happen and you have to rise to the challenge with all the emotions involved and make sure the person is being cared for and their families as well,” he added.

These experiences, along with the shifting course of his IT career ultimately led him to nursing school. Throughout his IT career, Caterino had been working from Massachusetts and Warren as one of earliest work-from-home professionals. Beginning in 2000 he and his team members were told repeatedly that their work was being outsourced – but then that decision was postponed.

This flexible work schedule as well as repeatedly being told his job would be outsourced (it wasn’t) led him to start taking prerequisite classes for nursing when he was in his 40s and then to enroll in a nursing course at Lawrence Memorial Regis College in Medford, Massachusetts, where he was able to take classes at night and on the weekends.

He graduated in 2009 and his IT job had still not been outsourced. His IT work schedule allowed him to get some nursing experience so he worked part-time in a psychiatric step-down unit. That work helped him learn how to talk to people in medical settings, learning to gain their trust and helping them feel safe.

He left that job and took a job at Berlin Health and Rehab and then in December 2012 started with CVHHH working overnight with hospice patients so their families could get some relief.  Shortly after that he was asked if he wanted to train to be a home health nurse and CVHHH was willing to work around his other job. In 2013 John Hancock told Caterino his team was being terminated in 2014 but by Christmas that still hadn’t happened.

And that was it, Caterino said. He began his training and his work, really finding a niche in hospice work at CVHHH.

‘I look at hospice as coaching. I’m Bill Belcheck and you’re Tom Brady and I’m going to give you all the plays that will come up and you’re going to make the calls. I tell people that we’re going to get you to the point where you’re comfortable and it’s going to be okay,” he said.

He said he always starts his conversations with the patients, many of whom don’t understand what hospice is and what they’ve chosen to do.

“I try to be honest and tell them that their life is coming to an end. Some are shocked, some understand. I tell them up front that we’ll try things that won’t work and we will try things that will work and that we’ll figure out the best regimen for them so that they’re comfortable and can do the things that they want to. I got a call last week from someone who wanted to try to ski one more time,” he said.

Caterino is an avid athlete, a skier, runner and tennis player. Athletics and Camp Ta-Kum-Ta and a gregarious personality means he knows a lot of people in the community and that means he finds himself working with friends and acquaintances whom he knows outside of his CVHHH work.

I’ve had several friends and acquaintances that have requested me and it’s a double-edged sword. Instead of being fearful, I go into my nurse mode and tell myself I need to step up and get this person and their family through it. I look at it as more of an honor than something to be feared. It’s part of life -- some of us get a crap diagnosis. Somebody has to help them and their families get through it. That’s what we do,” he said.

He always tells patients that they’re in charge and he wants to give options to make the best decisions. People want to know what is going to happen and he takes the time to explain the physical process of what will happen to them as the end nears.

The best part of the job he said, is hearing from families about how impactful the help of CVHHH was.

“Recently I had a family, as I was saying my last good-bye to them after their family member died. They said to me, ‘this is alright, we’re alright with this because you made it alright for us,’” he recalled, tearing up.

There was another patient where the daughter walked into her mother’s room and said, “Mom, I’m here, I love you.’ The daughter and son were both there and two minutes later their mother died. I thought that was one of the most beautiful things I’ve seen. Her mother waited until she got there,” he said.

“We work hard to get patients to the point where they’re not fearful. It’s a lot of teaching and coaching. It’s also a team approach of nurses, nurses’ aides, social workers, clergy, volunteers. I think the nurses’ aides are some of the unsung heroes of the agency. They’re coming in and providing people with personal care, getting people cleaned up and feeling better when they didn’t think they’d feel good like that again,” he said.

He said in each house where he works, he has two patients, the person on hospice and then the families.

“The family has to be respected. They’re going through a process too and they need help. I’m no good without my team and the family,” he added.