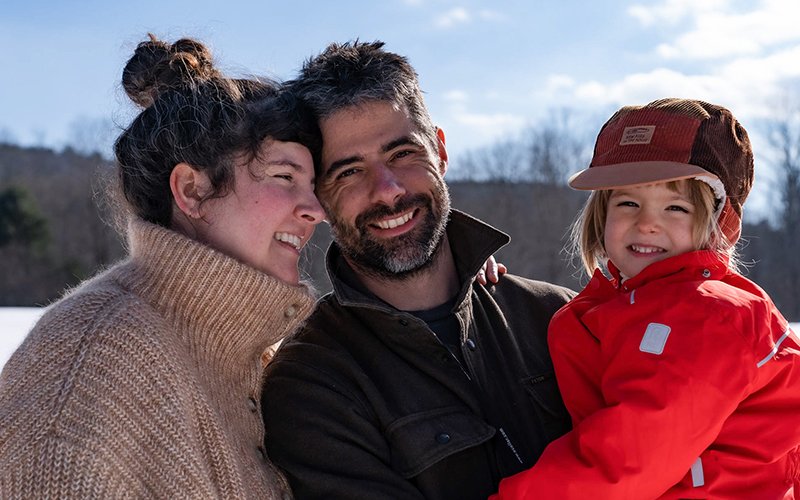 The Valley Reporter has reached out to all Vermont candidates for U.S. Senate and Congress and will be publishing interviews with the candidates who respond in the coming weeks.

Liam Madden, Bellows Falls, is running for Vermont’s seat in U.S. Congress as an Independent in the general election (though he is running in the Republican primary). Madden is a renewable energy professional and former Marine who served in Iraq and then became a vocal member of Iraq Veterans Against the War. He studied environmental policy, science and history at Northeastern University and won MIT’s business model competition for projects addressing climate change.

“I am running for Congress because I believe humanity is facing potentially catastrophic risks and none of the solutions that I hear among the mainstream political conversation give me any sort of comfort,” Madden said. “They feel like Band-Aid solutions and they’re missing the root causes of the problems. I don’t believe the two-party system can solve our problems. We need to innovate structurally new solutions into how we collectively solve problems.

“There is no higher priority for me than innovating structural and technological changes to government that make us better at problem-solving collectively. There are some things that are already in the public discourse that seem like common-sense solutions to me. Those would be rank choice voting or proportional representation, or election finance reform or term limits. I think there’s also innovations that need to be much higher priority, one of which would be federal ballot initiatives that could be a real-time way for people to bypass the politicians or enter in the policy-making discussion. Ballot initiatives are already policy in I think 30-sometihg states but they need to be online. They need to be faster than every two-year election cycle to give people the opportunity to stay engaged and collaborate on what good policy looks like.”

He added, “Climate change and governance are my core focus areas. On one of the most pressing issues of our civilization -- climate change -- I am the most experienced. I have spent most of my career on sustainability … I think I understand this issue, the actual nuts and bolts and the details, the best. It’s a sustainability crisis to me is the bigger issue we need to tackle and climate change is kind of one narrow band of that. The big picture to me is economic growth is what’s fueling this sustainability crisis. If we can’t consciously design an economy that isn’t dependent on growth, we’re screwed. The only way to change the economic system is through much more democratic mechanisms. We need to have better democracy, more tech-enabled democracy for the 21st century in order to tackle creating a new economic system which, therefore ,flows down into addressing the sustainability crisis. I think you need a cap on carbon emissions and you need to reduce that cap.”

In terms of addressing affordable housing, Madden said, “It seems to me that we also have a problem of an entire generation of young people looking for meaningful and secure livelihoods. We could train a military-scale service corps where young people in the millions are trained in the actual hard skills and given the career pathways through guaranteed federal employment. We have a Marine corps, why not also an affordable housing corps, why not also a regenerative agriculture corps, why not also a health care corps? We can solve these problems by training millions of people to learn the skills and use the skills that we need to build a regenerative civilization.”

When asked about his policy on universal pre-K, he said, “Love it.” Asked about how he’d fund it, he said, “The same way I would fund anything, which is reduce the exorbitantly bloated military budget, tax billionaires and tax fossil fuels and other energy sources that are unsustainable and we want to transition away from. That’s’ a pretty universal strategy for how you fund anything you want to do.”

Madden, a father of two young children, said, “I definitely resonate with the reality that it’s very hard for working people to bring new life into our world if we don’t create paid family leave. It has to be a priority and it’s the same funding mechanism we should fund anything with.

I have demonstrated that … I am willing to risk my life to be of service to a more beautiful world that I know is possible. As a Marine in the jaws of the military-industrial complex to actively organize other service members in opposition of the war was a potentially life-risking enterprise and I did that because I knew that if good people do nothing or just expect things to change or expect other people to do it then history turns out pretty bleak and ugly. I’ve proven through my actions that I’m willing to say unpopular things and to take risks and to build movements and organize and collaborate in ways that hold power accountable.

“I am speaking to the root causes of our problems with credible pathways to liberation from the two-party system and to a future where we can thrive in peace and with healthy, resilient communities.