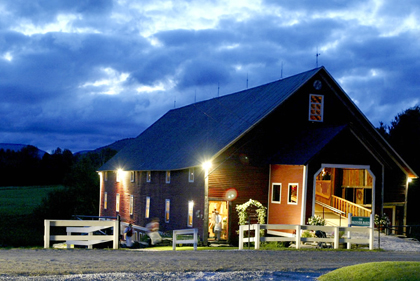 The Skinner Barn, Waitsfield, celebrates 10 years of professional theater this summer with its August production of The Mystery of Edwin Drood, adapted from the unfinished Dickens novel by Rupert Holmes. Artistic director Peter Boynton, a veteran of the Broadway stage and many years of daytime television, has assembled another sterling theatrical company comprised of Broadway and Vermont talent.

Boynton is joined by three other Broadway professionals to mountDrood,a show that won the Triple Crown of Tony Awards in 1986 when it first opened on Broadway: Best Musical, Best Book of a Musical and Best Original Score. The show won a total of 11 Tony Awards. Returning as company members this year are music director Jono Mainelli, show director Nick Corley and actor James Sasser.

Sasser, a member of the Riverdance company on Broadway, was featured as the Count in last summer’s production of A Little Night Music at The Skinner Barn.

Mainelli is returning as music director for his eighth show with the company. He is the assistant conductor of the Key West Pops Orchestra, a veteran of Broadway pit orchestras, and has accompanied leading ladies Patti Lupone, Celeste Holm, Lilliane Montevecchi and Charles Busch in their concert and cabaret appearances.

Corley is a veteran of numerous Broadway shows as an actor and is a well-known director of new musical theater works. Broadway audiences saw him in the revival of She Loves Me (where he and Boynton cemented their long friendship), the long-running annual Broadway production of A Christmas Carol at Madison Square Garden, and the original company of Mary Poppins.

Corley adds a bit of extra color to this year’s season as he will direct Drood at The Skinner Barn and then return to New York to begin rehearsals as a company member of the first Broadway revival of Drood this fall in a production to be headlined by Chita Rivera.

Enjoy summer theater at its best in a quintessential Vermont setting! The Mystery of Edwin Drood runs August 1 through 5 and 8 through12 at 8 p.m. Tickets can be purchased online at theskinnerbarn.com. For more information, contact Peter Boynton at (802) 496-4422.