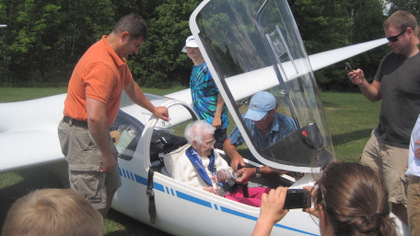 As Madeline Bache grew older, her family started having trouble coming up with ideas for what to get her for her birthday. So, to celebrate her 85th year, they took her up in a hot air balloon.

Since then, Madeline’s celebrated birthdays in both a helicopter and a World War II fighter trainer plane. This past year, she turned 100 and her family arranged for her to go up in a glider with Sugarbush Soaring, based out of the Warren Airport.

Madeline’s son, Dennis Bache of Moretown, and his four brothers and sisters have had fun putting together these birthday adventures for their mother because “she doesn’t really need any material goods,” he said, “and this is something that she wouldn’t have thought of doing herself.”

While Dennis wouldn’t necessarily call his mother a thrill-seeker, she’s had fun on all of the high-altitude adventures they’ve put together for her. And so has the rest of the family.

On a sunny afternoon last Sunday, July 22, Madeline’s relatives gathered around the gazebo at the Warren Airport, talking and laughing as they waited to watch their mother—or grandmother—go up in a glider plane. While three of Madeline’s children now live in Vermont, one traveled from Florida and another from California for the event, suggesting the adventures are as much an excuse for the family to get together as they are a way to celebrate a senior citizen who’s still healthy and happy after so many years.

Madeline was born in Rhode Island where she worked first as homemaker and then as a school secretary for over 15 years. She still lives there today, but she loves visiting The Valley to spend time with her children and grandchildren.

After her last trip to the area, where Madeline celebrated her birthday by exploring the slopes in Sugarbush’s all-terrain Cabin Cat, “she told me, ‘I never realized how beautiful the mountains are, this close up,’” Dennis recalled.

On this most recent trip, one of Madeline’s daughters helped her mom get ready for her glider flight by fastening a silk scarf around her neck. “Are you scared?” someone asked.

“If the pilot’s not scared, why should I be?” Madeline responded with a smile.

According to Dennis, his mom is a “cheerful, positive woman,” although “if you ever play cribbage with her, be prepared to get beat,” he said. Madeline lives in a senior citizen housing complex, and she enjoys partaking in card games and other activities with her fellow seniors.

So far, Madeline’s most memorable birthday adventure has been the helicopter, partly because “the helicopter landed in the field right behind our senior center,” Madeline said, incredulously. The whole thing came as a total surprise. “I didn’t know it was going to be there,” she said. “Everyone knew but me!”

This time, Madeline had a little more time to mentally prepare herself for the upcoming flight. When it came time to get into the glider, the pilot, Frank, came over to introduce himself. “So who’s the youngster who wants to go up next?” he joked, pretending to look around for his next passenger.

Even though Madeline can walk and climb stairs with an agility impressive for those her age, the whole family gathered around to help lift her into the small, engine-less aircraft. “Are you comfortable?” Frank asked, strapping her in.

“As comfortable as I’ll ever be,” Madeline responded happily. And they were off.

After the ride, Madeline said she couldn’t believe how great it was. “It’s such as smooth ride,” she said. “It’s so different…I can’t really describe it. I think you just have to experience it.”

Meanwhile, Madeline’s family was thinking ahead. But when asked what she wanted to do for her next birthday, Madeline shook her head, smiling. “Don’t give them any ideas,” she said.