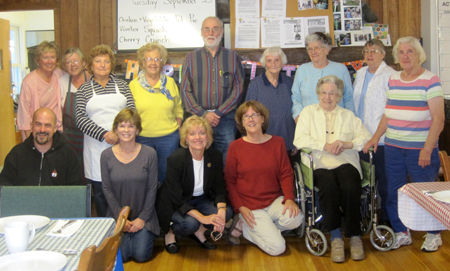 The more times you make a recipe, the better it turns out, and the Mad River Valley Seniors have had years and years to modify their favorites. Of the 70 or so people that contributed to the group’s new cookbook—due out in time for the holiday season—eight are in their 90s.

According to Fran Plewak, who’s organizing the project, the cookbook contains “a lot of really old-fashioned Vermont recipes,” she said. “There are a lot of things with maple syrup in them.”

Abbott’s recipe is not only a family favorite but a town favorite as well. Growing up in Fayston, Abbott and her siblings used to carry a 16-quart milk pail full of her mother’s deer foot chowder to school on the days when it was her family’s turn to bring hot lunch. And all of the students loved it, she said. “There would never be any left.”

Some of the cooks over at Evergreen Place and volunteers with the Meals On Wheels program also contributed recipes, and there are a lot of dishes featuring local produce such as zucchini, blueberries and apples, as well plenty of cookie recipes for the Christmas season.

“My grandson always says, ‘My grandmother, she makes the best cookies!’” Trudy Murphy said. Her recipe for applesauce oatmeal cookies is included in the book, which will be for sale in early December for $10. All proceeds from the book will benefit the senior center and the Meals On Wheels program.