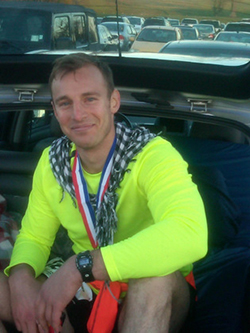 Three ultramarathons in a month? That sounds like an absolutely grueling thing to do, but for Waitsfield resident Matthew Jackson, it’s a way to honor wounded vets while raising money for their recovery.

Jackson, a vet himself, is a second lieutenant in the U.S. Army 82nd Airborne. He recently returned from Afghanistan where he earned a Purple Heart and a Bronze Star. A 2011 graduate of U.S. Army Ranger School, he returned from almost eight months in Afghanistan on September 11, 2012.

Immediately upon his return, he went to the Wounded Warrior headquarters and signed up to run three ultramarathons in honor of his buddies who are still at Walter Reed, including his good friend Jason who is a double amputee.

Jackson is in good physical condition from his time in Afghanistan and has participated in other endurance athletic events, according to his mother, Martha Jackson.

But ultramarathoning is an entirely different type of competition with most runners having pared their body down to weigh as little as possible. Jackson has muscles and moving them through the 50- to 53-mile races comes down to force of will, his mother said.

He ran the first race on November 3, running 53 miles in the Nashville Ultra with his friends Rahul Singh and Laura Jonikaitis. On his blog, on the Wounded Warrior website, he recounted the race:

“At 5 a.m., in the stiff autumn cold, we took our first steps from the start and towards the finish. As the sun crossed the sky turning from dawn to dusk, we crisscrossed the Greenway Park. The hours passed and landscape turned from pastured fields to industrial warehouses. As we each arrived at the finish, Rahul and Laura well before me, we couldn't help but pose for pictures and celebrate a small triumph. Yet this was just the start of my month-long challenge. And in so many ways it is reflective of the struggles that our wounded warriors are facing.

“With each small step towards recovery they make, a small victory is won, but a much longer fight faces them. In less than two weeks I am driving to DC to complete the JFK 50 miler. With the strong wind at my back that your support is giving me, I will once again cross the finish line. Thank you for your belief in me, for your belief in us; it inspires us to believe in ourselves.”

His second race was November 17, the JFK Ultramarathon in Washington, DC. His third race is December 3 in Pine Mountain, Georgia. He started with a goal of raising $50,000 and has so far raised $29,553.82.

His parents are understandably proud of his accomplishments and proud of his tenacity as a runner and a fundraiser. (The website where his blog is located and where donations can be made is https://support.woundedwarriorproject.org/individual-fundraising/RAW/.)

Jackson was injured in Afghanistan. He suffered head trauma and was medivac-ed to a hospital where he was kept for six days, his mother said.

She said that from the time he was young, he was interested in a job that would allow him to help people in crisis. She said he watched a documentary about a young man in medical school who was trained to parachute into crisis/natural disaster areas with medical supplies and hike in to provide essential medical care.

“He knew that he wanted to do something like that but did not want to go to medical school. He talked to the UNHCR and the Red Cross about such a job and was told that those organizations don’t provide the training, that the best training came from the U.S. military,” Martha Jackson explained.

He went to Arizona State University and graduated with a degree in political science and Middle Eastern studies and Arabic. He returned to Vermont and was accepted to the army officer candidate school.

His father, Ira Jackson, who is picking up his son in Boston and bringing him to Vermont for Thanksgiving, reported, “Matt went off to Afghanistan with very little in his 150-pound duffle – but it did include a ‘Mad River: Ski It If You Can’ bumper sticker, a Vermont Strong license plate, and some Vermont granola and Highland maple syrup.”