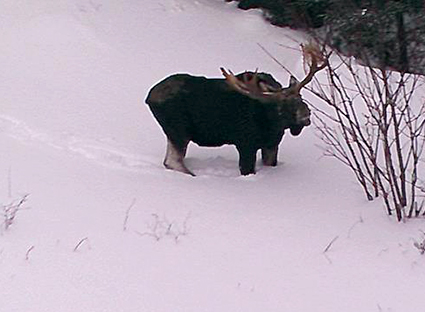 In the last week of December, videos started appearing online. “Moose chasing skier at Sugarbush,” some YouTube titles read, their low-resolution footage depicting a large, horned bull following a skier down a trail towards the top of the ski resort’s Gate House Lift.

In the video, once the skier puts enough distance between him and the moose, it stops running and eventually wanders off back into the woods. But some folks worry about the moose’s resurgence on the mountain since its first slope-side sighting in December and they wonder if the animal could be dangerous to humans.

“Moose live in the mountains, and we like to recreate up there too,” Sugarbush public relations director Patrick Brown said, explaining that because the resort is located in the animal’s natural habitat, moose sightings are not at all uncommon. “We see moose up here all of the time,” he said.

“From everything we’ve been able to tell at this point, it’s just a moose being a moose,” LeCours said, explaining that there is no indication that the moose is diseased or sick. “It’s always a possibility,” he said, “but we won’t know for quite some time.” 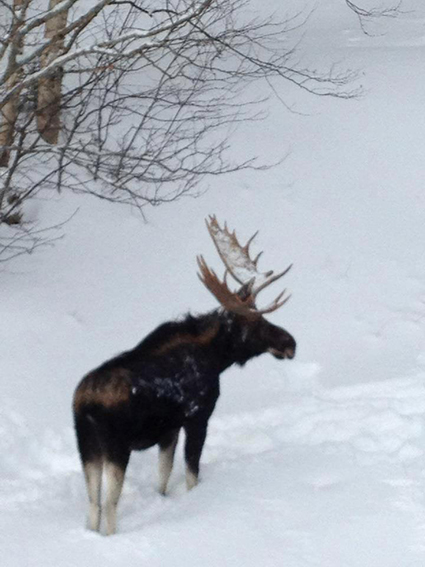 As a precaution, LeCours’ officers instructed Sugarbush to shoot the moose using rubber bullets in hopes of driving it away, and he understood that an employee did so on Monday night, January 7.

“The idea is to make the slopes not a good place to hang out,” LeCours said. “We’re hoping that [the moose] gets the message, but we don’t know if that will be successful at this point.”

As for the moose venturing out onto the ski trails so frequently, the groomed area “would certainly be an easier place for it to walk as the snow is getting deeper,” LeCours said.

Right now, “people just need to be aware that [the moose] is there,” Le Course said, “so they can avoid it if they can…. Our recommendation would be to keep a wide berth.”

“This moose may be at a point where he is finding the volume of people on the trails irritating,” LeCours said. “We may have to take more permanent action. That is always a possibility. Our concern—and we won’t know for a while—is whether the moose is beginning to experience the first symptoms of brain worms. They start acting bizarre, aggressive and then die a slow lingering death. In those cases, we will put the animal down to prevent it from suffering,” he added.

At Sugarbush, “we’ve taken measures to protect our guests and our employees,” Brown said, explaining that in addition to reporting the sightings, Sugarbush has temporarily stopped lifts multiple times, and closed trails, since the bull moose was first spotted and Lincoln Peak and when a cow moose was spotted at Mount Ellen.

“The safety of our guests and our employees is out biggest concern,” Brown said, “followed very closely by allowing wildlife to live in its natural habitat.”