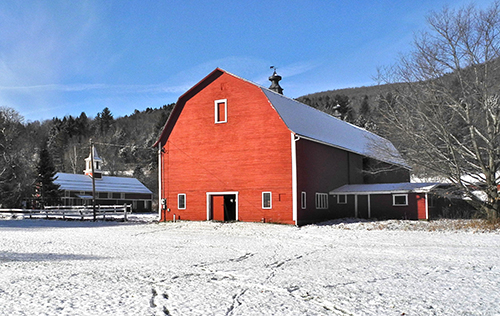 The Flemer Barns Task Force was present at the Waitsfield Select Board meeting this week to present an update on their progress and discuss next steps. At a well-attended public meeting on April 8, task force chair Stan Ward reviewed the original select board charge, research conducted by the task force, community outreach efforts to date, the results of the community survey conducted and the proposed process for completing their work. A majority of the Flemer Barns Task Force (FBTF) members were present and also participated in the discussion.

The FBTF was charged, in a memorandum dated October 19, 2012, to explore options and solicit public input for the use of the site and the barns to enhance the community and the historic Waitsfield Village. In addition to leading a public discussion that evaluates the potential uses, the task force shall seek out possible partners, investigate ownership structures and consider financing options for the Flemer Barns property. The task force should present a recommendation by July 2013.

Waitsfield purchased a one-year option purchase agreement to buy the property for $250,000 which will expire July 31, 2013. Of particular interest to the FBTF was whether or not the town should purchase another one-year option purchase agreement at a cost of $3,500 to allow additional time for interested organizations and individuals to come up with financially viable community uses of the site. Select board member Bill Parker asked the FBTF to consider fund raising from interested organizations to help fund the extension of the purchase option.

The results of the community survey conducted by the task force were also presented. The survey asked the question "What are your ideas for how the Flemer Barns property can be used for the Mad River Valley Community?" Sixty-eight members of the community responded to the survey, including 40 respondents from Waitsfield, 18 from Warren, 4 from Moretown, 2 from Fayston and 1 each from Waterbury, Duxbury, Stowe and Burlington.

Top themes from survey responses included agricultural uses, recreation/play areas, arts center, community gathering, educational/vocational, teen center, housing/residential, and community center. While the survey participation rate was not high enough to be representative of voters or community opinion, the task force felt that the survey results were helpful in providing direction for further outreach and engagement of the community.

There was a question regarding zoning for the property as it relates to the uses identified by the survey. The Flemer Barns Task Force responded that retail and office space would not be allowable uses but that the other uses are not in conflict with the current zoning.

There was also a question regarding using the Flemer Barns site for a new library and using the current library building to house the town offices. John Reilly, who was present at the meeting, stated that discussions with the Joslin Library Board of Trustees indicated that moving the library from the building was not a viable option.

There was a question about whether task force members have gone to the other Valley select boards to solicit interest since this property would potentially be of community-wide benefit. The FBTF stated that as specific programs for the site become clear it may be appropriate to involve the other Mad River Valley towns or possibly work with existing multi-town organizations such as the Mad River Valley Recreation District.