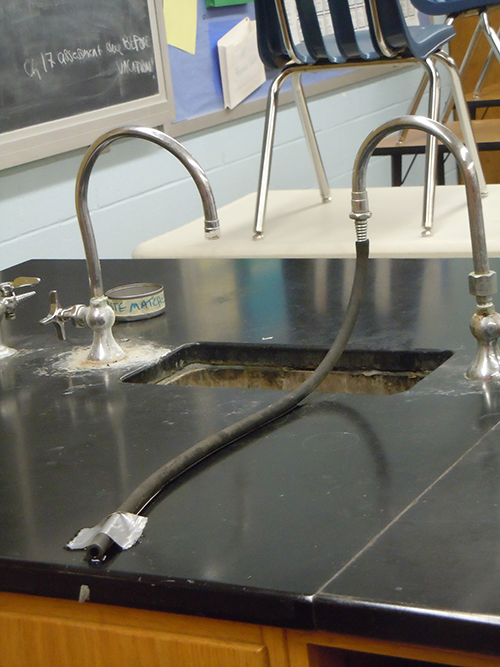 In light of the vandals who struck Harwood Union last week, the Harwood Union School Board will revisit its position on surveillance cameras inside and outside the school.

HU school board chair Deb Hunter said that the board wanted the community to know that in the past the board opted against cameras inside the school, preferring instead that the community resources be used for educational purposes.

"It's sad that one consequence of this costly crime against the community must be a re-examination of our past practice regarding surveillance cameras outside of and inside of the school," Hunter said.

Last week vandals struck Harwood Union sometime between April 30 and May 1, when school personnel arrived at 5:45 a.m. to find the school flooded with 8,000 gallons of water. Vandals entered the school and conducted an extensive amount of duct taping drains closed and water fountains on, leaving faucets and toilets running.

Washington West Supervisory Union business manager Michelle Baker said an estimate on the cost of the damages was expected today, May 9, but noted that the school's responsibility is limited to its $1,000 insurance deductible. She said that the bills from the cleanup company and the asbestos abatement company had not yet come in and said that in some places flooring will have to be replaced, which would require a bid process.

Harwood was closed for two days, May 1 and 2, for cleanup. In addition to the flooding the front lawn was damaged by vehicles.

Hunter said that last week's vandalism did not set off the school's security system because only select areas of the school have armed on that system.

Harwood currently has only a few surveillance cameras on the south side of the building in the direction of the bus barn. This is the fourth and most serious act of vandalism to take place at Harwood over the past year. All the electrical cords to the diesel buses were cut during the winter, a 4 by 4 was used to break a window in the principal's office which was entered and damaged and the marquis, signs and other areas were spray painted.

Hunter said she had been advised by WWSU superintendent Brigid Scheffert that there was a second act of vandalism last week which occurred on Wednesday night, May 1, when the lawn of the school was further damaged by a vehicle.