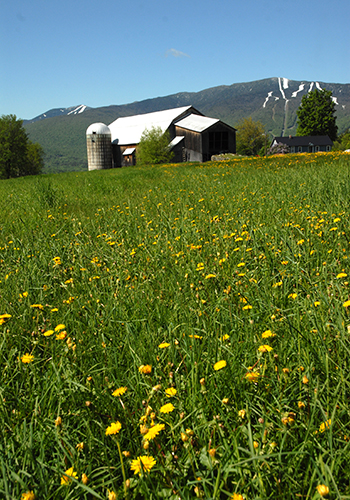 "With these generous donations, the Vermont Land Trust is able to complete its campaign to conserve one of The Valley's most well-known farms. A community celebration of the project will be planned for early fall, when the conservation and sale of the farm to Marisa Mauro of Ploughgate Creamery is expected to be complete," said Liza Walker, Mad River Valley director for the Vermont Land Trust.

"It has been a privilege to join together with the Mad River Watershed Conservation Partnership and so many dedicated and generous supporters to seize this incredible opportunity to preserve the legacy of farming on Bragg Hill," said Walker. "This is a fantastic community achievement that reflects the shared desire to support agriculture and sustain the places that offer beauty, inspiration and a connection to our rural heritage."

The Bragg Farm campaign received broad support from more than 300 individuals, families and businesses who helped VLT meet its fundraising target of $500,000.

"It's unbelievable," said Fayston resident Tom Folger, remarking on the campaign's completion. Tom and his wife, Dorothy, stepped in to help launch the ambitious fundraising effort. "When we first bought our place on Number Nine Road, there were only two people above us. I think it's crucial for the future of The Valley to keep this land as a farm. We have to preserve it for future generations."

This sentiment is echoed by Pamela Rickard, who, with her brother, Jon, joined the campaign to honor the memory of their mother, Carol Lippincott, who lived in The Valley for 30 years and owned The Warren Store. "Our mother's love for the natural beauty of Vermont and her passion for its preservation inspired us to contribute to the conservation of the Bragg Farm," she said.

While the Bragg Farm may be a Mad River Valley landmark, the campaign to save the Bragg Farm was bolstered by donors from the Waterbury community and from conservation supporters across Vermont and beyond the borders of the Green Mountain State.

"The project would not be possible without funding from the Vermont Housing and Conservation Board and the town of Fayston's Conservation Reserve Fund. The Vermont Land Trust is still accepting funds to support the project goal of preserving the farm's iconic barn. Future charitable donations will be directed toward efforts to restore and maintain the historic structure," Walker added.

The conservation and sale of the farm to Marisa Mauro of Ploughgate Creamery will take place by early fall with the fulfillment of $330,000 in federal and state funds awarded by the Vermont Housing and Conservation Board. The farm will be sold at its appraised value as farmland (versus its value with development rights intact) for $165,000 to Mauro. The land trust purchased the farm from the Bragg family for $760,000, making up the difference with donations and state, federal and municipal funds.

In advance of Mauro's purchase of the farm and under the terms of her lease agreement with VLT, Mauro will ready the farm for her new dairy enterprise this summer, beginning with renovations to the newer portion of the barn and addition of a new creamery structure for the production of artisanal butter and fresh cheeses. Mauro expects the arrival of cows at the Bragg Farm when these preparations are complete.

For Bob Vasseur, chair of the Fayston Select Board and longtime resident, dairy farmer and sugarmaker on Bragg Hill, the return of dairy cows to the Bragg Farm brings back memories of many days spent working and visiting with Willis Bragg at the farm. "We'd go over there after we were done with our chores. Willis was milking and we'd just talk," Bob remembers. "It will be a good thing to have the Bragg Farm back in production by the owner."

Considering the other future beneficiaries of the Bragg Farm conservation effort, project supporter Bill Carey notes, "Lucky cows. They will have a beautiful view."

For more information about the Bragg Farm project, contact Liza Walker at 496-3690 or visit www.vlt.org/bragg.