In Warren, Pitcher Inn guests and diners were evacuated during the night when water rose into Tracks in the basement of the inn. Small Step Farm in Waitsfield was flooded as well. 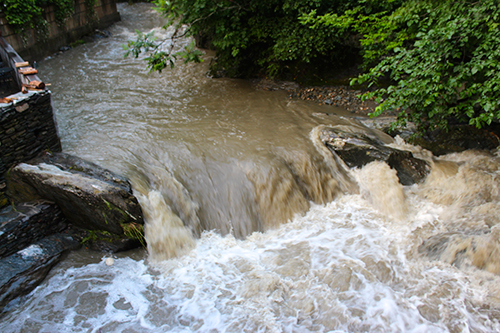 Sandbags kept some water at bay in Warren and Waitsfield villages.

In Waitsfield, Meadow Road was closed where the Mad River had jumped its banks and remained closed for part of the day on July 4.

Water levels were turbid and fast moving throughout the Mad River on July 4. The Lareau swimhole in Waitsfield and Riverside Park in Warren were left sodden with large trees down at Riverside. Warren Falls was reported to be unswimmable due to high water.

Portions of Prickly Mountain Road in Warren were damaged but repaired on the morning of the Fourth. Route 100 from the Warren-Granville line was washed out south through Granville and a bridge on Route 12A was also damaged, closing a portion of that road temporarily.

While water levels receded from the 7,000 cfs peak of 4 a.m. on July 4, The Valley, Central Vermont and many other portions of Vermont have remained under threat of flash flood watches this week.

As The Valley Reporter goes to press on July 10, heavy rain, thunderstorm and flash flood warnings persist. Drivers are reminded never to drive through standing water and all are advised to keep an eye on streams that may suddenly swell and flood. See more flood coverage inside.