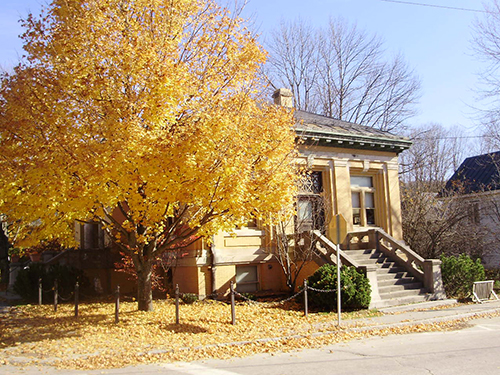 At Joslin Memorial Library in Waitsfield, "people will come in and say, 'it smells like a library,'" trustee Sandra Reilly said. "They love the fact that it's old."

This year, Joslin Memorial Library celebrates its 100th anniversary. The building was constructed over a period of eight months in 1913 with funds donated by George Joslyn in memory of his grandfather, Waitsfield resident Joseph Joslin. The cornerstone of Joslin Memorial Library was laid on Memorial Day 1913, and 300 people attended its dedication on October 30, 1913.

The building, complete with limestone columns, a marble entryway and starburst windows, maintains a sense of antique charm even 100 years later, as Joslin Memorial Library incorporates new technology, updates its collection and expands its programming.

Most recently, with the help of over 30 volunteers, the library transferred its card catalog to an automated system in February of 2011. In making the transfer, "you might say we were in the forefront of smaller libraries," trustee Art Conway said.

"I think we were more in the middle," director Joy Worland clarified. With the new automated system, patrons can now reserve and renew books online, as well as download audiobooks and e-books.

"It was hard, getting some of the volunteers to be comfortable with [the automated system]," Reilly said.

"And the patrons, [who] we're still working on," Worland said, adding that "even before the automation, it was big to bring computers into the library."

In the past few years, Joslin Memorial Library has focused on its programs and collections for younger readers. With the help of children's librarian Lisa Italiano, the children's program now collaborates with that of Warren Public Library, and Worland started a new section consisting entirely of books for teenagers. "When I got here, we hardly had a young adult section at all," Worland said, "and there's a lot of great young adult literature being written right now."

Despite recent changes, one thing will always stay the same: The library has continued its policy of not charging fines. Instead, a conscience box sits on the desk, and "I think we make more money off the box than if we charged 5 or 10 cents a day," Worland said. "Some people will come in and say, 'This is a beautiful building,' and put money in."

On August 10, the Joslin Memorial Library 100th anniversary celebration will celebrate what's old about the building as well as the new things taking place inside of it. "People come in and check out books," Worland said, "but [the library] is really a lot more than that. It's a celebration of the library as a community center."

On Saturday, August 10, the celebration will kick off at 1 p.m. in the park next to the library and Waitsfield United Church of Christ with a reading by Peter Joslin of the 1913 dedication speech written by founder George Joslyn. The afternoon will include a talk by famed mystery writer Archer Mayor, music by the five-piece brass band, Constitution Brass, ice cream, historical displays and other activities, including the chance to contribute to a time capsule to be opened 100 years from now.