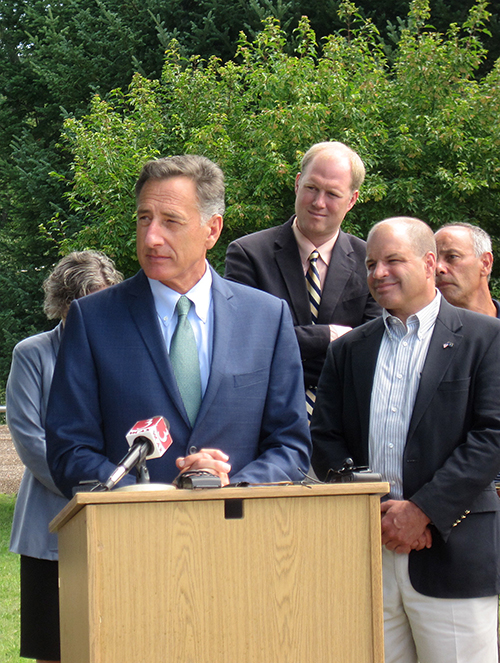 On Monday, August 12, Governor Peter Shumlin visited Moretown to announce that the town was awarded a $700,000 Vermont Community Development Block Grant (CDBG) to build new town offices, after its old offices were destroyed due to flooding from Tropical Storm Irene.

"Moretown got whacked harder than anyone by Irene," Shumlin said, but now, "next time we get flooded, the town offices and town government won't go underwater," he said. He made the announcement in front of the Moretown Elementary School playground—the site for the new offices, which will sit three feet above the Irene floodplain and one foot above the 500-year floodplain.

The Moretown Town Office Committee, chaired by Clark Amadon, came together in December of 2011 to conduct an all-inclusive search for sites on which to rebuild the town offices. In the meantime, the town set up temporary offices in a building it leased from Moretown Landfill at their Route 2 location.

By June of this year, after holding two public forums, the town office committee had selected the playground site as the most convenient and cost-effective option, and Moretown submitted a CDBG application in the amount of $865,286—the total estimated cost (including construction and administrative and legal fees) of the new town offices.

At $700,000, the approved grant will not cover the total cost of the offices, but the CDBG is "timely and generous," Moretown Select Board chair Tom Martin said at Monday's announcement, expressing the town's gratitude.

The CDBG provides funding for towns to rebuild infrastructure above the floodplain. The disaster recovery program is the result of a provision championed by U.S. Senator Patrick Leahy, Senator Bernie Sanders and Congressman Peter Welch in the federal budget bill.

Moretown will hold a bond vote this fall asking residents to approve the town's out-of-pocket expenses for the new town offices, and "a year from now, hopefully there'll be a lot of construction sounds coming from this site," Amadon said.

The new building will be fully accessible and highly energy efficient. It will include offices for town officials, a meeting space and a vital records vault. That vault is especially important because many of the town's public records were destroyed during Tropical Storm Irene. The new facility is designed to fit the character of the village and will be significantly larger than the old building – close to 2,000 square feet, compared to the previous 600-square-foot town office.