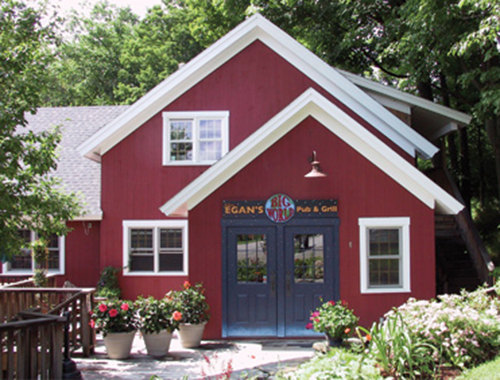 Bryn Smith, a longtime Valley skier and Massachusetts business owner, is the new owner of the former Egan's Restaurant on the corner of Routes 17 and 100.

Smith purchased the property last month and intends to use the two bedroom apartment as his ski residence this season and is actively seeking a restaurateur to lease and run the restaurant.

"I've been watching that property for several years and was shocked by how the price had dropped. When it dropped again, I jumped on the deal," Smith said.

Smith, who owns the N.I.C.E company which sells heavy equipment, is also the owner of the White Horse Inn on German Flats Road, which he bought last year and has had on the market.

He said he wouldn't be surprised if there was movement on the inn soon as well.

While Smith is excited about the prospect of returning the restaurant to its former popularity, he is distressed by a recent decision of the Waitsfield Water Commission to charge him debt service and maintenance for the municipal water project. The building is not currently hooked up to the water system, although the former owner agreed to sign on to the system, using 15.75 ERUs. An ERU is an equivalent residential unit that is similar to the amount of water that a three-bedroom home would use.

The ERU assessment for Egan's was based on the number of seats permitted (150) as well as the property's wastewater permit.

Smith is balking at paying the debt service and maintenance for the restaurant –which is not open – and said he thought it was fair that he temporarily be allowed to pay for the number of ERUs for his apartment until he can lease the restaurant.

The monthly debt service and maintenance fees for 15.75 ERUs comes to almost $1,200 a month which he said is "dumbfounding."

"I'm not working with people who want to promote business in Waitsfield. This will be the reason if the restaurant is not open in the near future. I'm at an impasse. Just because the former owner agreed to sign up for water doesn't mean the property has to spend almost $1,200 a month – without using the water," he said.

But, according to Robin Morris of the town's water commission, the fact that the former owner agreed to sign up, and the fact that Peoples Bank, from whom Smith bought the property, has been paying the monthly debt service and maintenance fees, means that the new property owner has to honor the commitment.

Relying on the commitment of the former owner and the bank, Morris said, the town built infrastructure to the property, applied for and received permits for the project and incurred debts on the expectation that Egan's (and the other properties in town that signed up) would all pay per ERU for debt service and maintenance.

"Here's the challenge. We have a water system that the select board told the townspeople would only be paid for by the users. If we suddenly give property owners who have approximately 7 percent of the total ERUs a break – if we allow him or anyone not to pay their bill – that same 7 percent has to be charged to the rest of the users," Morris explained.

"I'd argue that for one person to not pay their debt service and maintenance – which everyone is paying whether they are hooked up or not – is anti-business," Morris said.

"The commission has a great deal of empathy for Mr. Smith but any reduction in charges for him has to be offset by increases in charges to all other customers. That is the commission's dilemma," Morris said.

Morris said that after gathering a year's worth of usage data the water commission may consider apportioning debt and maintenance based on actual water usage rather than assessing it on a per ERU basis.

"But I can't answer that yet. Towns use different systems. We've got to find a solution that is fairest to our users. Right now there are people who are signed up but not hooked up and they are still paying. It's very likely that everyone who is signed up will continue to have to pay some base fee to keep it fair to all users," Morris said.

For now Smith is planning on using the apartment and is exploring whether the pre-existing water system at the property is functional. That's a solution that goes against the agreement the former owner signed but something the town currently cannot force Smith to honor short of putting a lien on the property.