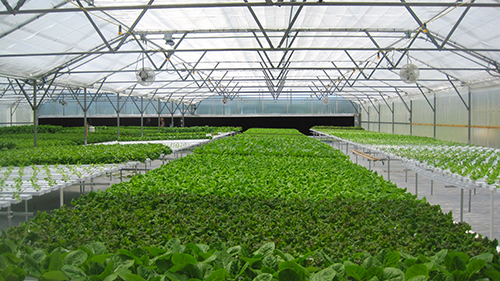 The well-lit greenhouses that are visible from Route 100 in Waitsfield, off Hartshorn Road, are the result of new modern grow lights that came from Holland.

The lights at the Green Mountain Harvest greenhouse are highly efficient lights that mimic the natural daylight during the longest days of the year, said owner David Hartshorn.

The lights can be programmed to go on and off electronically, but right now they are being operated manually.

"These lights don't give off a lot of heat. Holland and Europe are all in a rage about them. We had to fly them over from Holland," he said.

The newly lit up greenhouses are the first phase of Green Mountain Harvest's plans to build a total of 40,000 square feet of hydroponic greenhouse bays. In five or six years, at full build-out, Hartshorn said he expects to employ about 20 employees.

Hartshorn partnered with John and Ted Farr to start Green Mountain Harvest last spring. They grow hydroponically – or in water with nutrient solutions.

Hydroponics has been around for centuries, but the growing method has progressed rapidly in the past decade with the use of computer technology to create the optimal growing conditions for plants within a closed system. As a result, Green Mountain Harvest's greenhouse covers only a quarter of an acre, but it will produce 360,000 heads of lettuce in one year.

"We don't waste anything," Hartshorn said of his hydroponic system, which uses one-tenth the amount of water used in traditional agriculture. Plants grown hydroponically are less vulnerable to death due to pests and frosts, and they are ready for harvest weeks earlier than those grown in fields.