By Rachel Goff and Lisa Loomis

At the south end of The Valley, Warren voters will vote from the floor on 12 articles, including a 2014 town budget that is down 13.99 percent from last year.

“This was a year of regaining stability,” the Warren Select Board wrote in the 2013 Town Report. “The flood and its damage [are] behind us, infrastructure projects are coming to fruition and we’re steadily reaching our goals.”

The most noticeable decrease in Warren’s expenditures between this year and last comes from the completion of two road reconstruction projects for Inferno Road and West Hill Road, which contributed $441,309 and $395,500 to the 2013 budget. Without those projects, the net highway department budget decreased 26.20 percent from last year, even with several smaller road reconstructions resulting from the state imposing stricter standards for culverts.

Warren’s 2014 budget, which comes in at $2,960,011 after revenue, does account for some small increases in expenditures, including a 20.37 percent increase in the fire department budget, which increased from $62,000 in 2013 to $74,630 due to more money being allotted for repairs and maintenance, supplies and uniform and safety equipment.

In addition, Warren’s contribution to the Mad River Valley Planning District (MRVPD) increased from $23,742 in 2013 to $30,500 in 2014, a 27.93 percent increase that the town considers worthwhile. “Through our alliance with other Valley towns in the MRVPD, we were able to secure help with a study of area downtowns on how best to enhance what we have to make a more vibrant community,” the select board wrote in the 2013 Town Report, speaking of a survey conducted by the Vermont Downtown Action Team (V-DAT) over the past year, the findings of which sparked—and continue to spark—conversations amongst town officials and residents.

On Tuesday, residents will vote on the budget and authorize the select board to set a tax rate, as well as several other articles, including one that asks for the allocation of $10,000 to the town’s Conservation Reserve Fund to be used for projects outlined in the Warren Conservation Commission and Reserve Fund Charter from April 24, 2007. Another article asks that the town’s Green Mountain National Forest money goes to Warren Elementary School.

Article 10, an advisory article, asks residents to call on the state Legislature to create a public bank for Vermont, one which helps towns “reduce the local tax burden by offering low cost bonds for public works and depository for their accounts with competitive interests … makes loans and investments in Vermont’s people and our economy [and] will help create jobs, income and economic security for all Vermonters.”

In addition to voting on 12 articles from the floor, Warren residents will also vote via Australian ballot to elect town and school district officials.

Fayston voters will be asked to approve a town budget of $1,112,924 this year, an 8.7 percent increase over last year’s budget.

According to select board member Ed Read, the difference accounts for a number of small increases—and some decreases—between next year’s budget and last year’s.

Notably, Fayston’s Capital Fund budget is up $40,000 from last year, with the town setting aside $20,000 more for road retreatment and $10,000 more for equipment, due to an increased cost in paving materials and an ever-fluctuating state contribution. All of the town’s equipment is on a schedule to be repaired. In this year’s budget the town has also set aside $10,000 for the Fayston Natural Resources Committee’s reserve account, which was approved at Town Meeting last year.

Fayston voters will elect a select board member, as Ed Read’s term expires. They will also elect a town clerk and a town treasurer and a delinquent tax collector. Patti Lewis fills those roles currently and her term has expired.

Fayston needs to elect a school board member to the Harwood Union School Board to serve out the balance of Russ Beilke’s term. Beilke resigned last year and Susan Daley was appointed to fill that term until Town Meeting.

Fayston voters will be asked to create a Property Assessed Clean Energy (PACE) district in the town which will allow property owners to access funding for energy efficiency and renewable energy projects, while repaying those funds on their property tax bill.

Voters will be asked to authorize the sale of two parcels of town-owned land, 7.5 acres off Henry’s Way and 12.4 acres off Bassett Hill. Fayston voters will join other Vermont voters in discussing a nonbinding resolution calling for the establishment of a public bank for Vermont.

Waitsfield voters will be debating an article calling for future town and school budgets to be voted on by Australian ballot versus from the floor. That discussion and vote will happen from the floor. 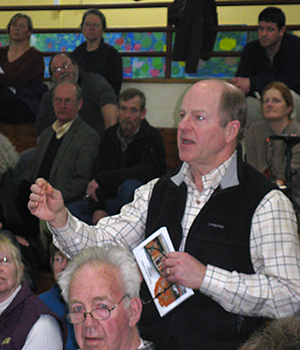 Waitsfield voters will also be asked to approve a shift in the town’s calendar year which will mean that the budget that voters pass next week will be for 18 months, the first 6 months of 2014 and then the 12 months from July 1, 2014, to June 30, 2015. That will be voted on from the floor in Article 5.

Article 6 requests $20,000 to be used in matching funds for two grant applications for Bridge Street improvement projects and Article 7 asks that the town be authorized to borrow up to $50,000 for road paving.

Article 8 requests up to $75,000 for improvements to the covered bridge, culverts, catch basins and stormwater infrastructure on Bridge Street.

Article 14 would require the signatures of 10 percent of the town’s voters when petitioning for reconsideration or rescission of an action taken at an annual or special town meeting. Currently signatures of 5 percent of legal voters are required.

Waitsfield joins other towns in voting on a nonbinding resolution calling for the creation of a public bank in Vermont.

By Australian ballot voters will be asked to approve a special article authorizing the town to borrow up to $500,000 from the Vermont State Revolving Fund to continue with the second phase of a program that provides low-interest loans to property owners to build decentralized wastewater systems. Borrowing the money and using it for decentralized systems helps retire the town’s debt from 2006 when voters rejected one large wastewater system for the town.

Waitsfield voters will elect a new member of the select board via Australian ballot on March 4. Peter Reynells is running for a seat being vacated by Bill Parker. Select board member Logan Cooke is running for re-election.

Jennifer Peterson is running for town clerk and treasurer and is being challenged by Pennilee Reynells.

Moretown residents will vote from the floor on 27 articles and via Australian ballot on three articles involving over $5,000—including a 2014 town budget that is up 4.1 percent from last year.

This past year, “we were finally able to say goodbye to Irene with the completion of the Bridge #41 and Town Hall restoration,” the Moretown Select Board wrote in the 2013 Town Report. Even with some added costs for rebuilding after the flood, “this marks the fifth consecutive year that we have been able to offer a level-funded budget,” the select board wrote.

The level-funded budget does not include the cost of a new town dump truck, however, which is accounted for in a separate article that states: “Shall the voters of the Town of Moretown vote to approve the purchase of a new tandem axle dump truck for a sum not to exceed $160,000 after trade-in of the 2004 dump truck, with $30,000 to be used from the Capital Reserve Fund and the remainder to be financed over the next three years with payments beginning in 2015?”

Articles voted on from the floor include the appropriation of sums of money under $5,000—and generally closer to $500—to help support the work of Central Vermont Home Health and Hospice, the Vermont Association for the Blind and Visually Impaired, People’s Health & Wellness Clinic and several other local and state organizations.

Duxbury voters will be asked to set aside $20,000 to be used as matching funds for future grants at Town Meeting this year and will also be asked to use $45,000 from the town’s capital reserve fund to replace 16 culverts. Voters will be asked to make expenditure from the capital reserve fund, to spend up to $193,395 to lease for seven years a 2014 Volvo wheeled excavator. That sum would be reduced by $12,000 for the trade-in the town brings and the town will have an option to purchase the machine after the seven years. During each year of the lease, the town would pay $28,140.

Duxbury voters will be asked to authorize the select board to explore shifting the town from a calendar year to a fiscal year.

Duxbury’s budget was revised as late as last Thursday, February 20, in hopes of mitigating what was expected to be a 6 cent increase in the municipal tax rate. The new budget will reduce the projected increase to an estimated 5 cents. That was achieved by reducing several line items in the road crew budget, reducing funds for records restoration, and reducing funds for appraisal services. According to the minutes of the February 20 budget meeting, members of the road crew offered to forgo proposed salary increases.

Duxbury voters will be asked to approve a budget that cuts the town clerk from four days a week to three and increases the town treasurer from one day a week to two. The proposed budget cuts the town clerk’s salary from $35,000 to $24,598 and increases the treasurer from $6,000 per year for one day a week to $16,398 for two days a week. The assistant town clerk was slated to receive a 6.38 percent increase from $9,400 to $10,000 but refused that increase at last week’s budget meeting.

Duxbury, like most Vermont towns, adopts its budget from the floor at Town Meeting, which means that every figure in the proposed budget can be discussed or amended from the floor.