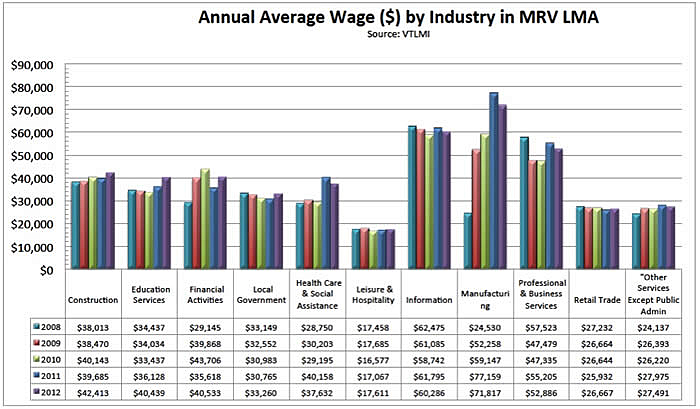 The 2013 Mad River Valley Data Report is out, and it's full of everything you wanted to know about the towns of Waitsfield, Warren and Fayston—from median home sale prices to total annual wages by industry—but didn't want to be caught snooping around after. "It's your almanac to the Mad River Valley," Joshua Schwartz said. "What else could you ever ask for?"

Schwartz, who serves as director of the Mad River Valley Planning District (MRVPD), authored the 2013 data report with the help of MRVPD summer intern Dara Torre. The report, which is available online at mrvpd.org/MRVDataReport.php, fulfills the requirements of the 1998 Memorandum of Understanding and provides information for community planning purposes.

Throughout the report, statistics "show that our economy is rebounding," Schwartz said, as figures such as the number of houses sold and the number of construction permits issued is starting to increase after 10-year lows in 2008 and 2009 due to the nationwide economic recession.

In terms of industry, the leisure and hospitality sector continues to employ the most people in The Valley, with 895 jobs in 2012 compared to the next highest sector, retail trade, with 382 jobs. Other than a spike in 2011 as The Valley worked to repair damage done by Tropical Storm Irene, jobs in the construction sector have remained steady. After a sharp decline in 2009, jobs in the professional and business services sector as well the financial activities sector have started to increase slightly.

The economic recession was not that long ago, Schwartz notes, and The Valley will have a better understanding of how different sectors are recovering in future reports. "We're looking at cyclical nature," he said.

Overall, Schwartz notes, "the wages paid in The Valley are not necessarily that high, but the income is substantially high," he said, which suggests that a lot of employment is coming from outside of The Valley, such as self-employed workers who do contracted work on projects throughout the country.

Locally, The Valley's economy is "so tied to the snow industry," Schwartz said, and the numbers reflect that. Last winter, Sugarbush Resort received 279 inches of natural snowfall, compared to 162 inches the previous winter, in 2011-12. As a result, skier visits were up 44 percent and The Valley's restaurants and inns saw a significant increase in tax receipts for alcohol, meals and lodging between the two seasons.

The 2013 data report has helped to inform an ongoing economic development study for flood resilience in The Valley, the results of which will be presented to the community at a summit this summer.

One interesting finding that has come out of the economic development study, Schwartz notes, is the significant out-migration of people ages 18 to 34 in The Valley. As noted in the data report, in 2010 the median age of people in Waitsfield was 45.9, and in Warren and Fayston it was 45.2. "The Valley is old," Schwartz said, comparing those numbers to a statewide median age of 41.5 and a nationwide median age of 37.2.

The out-migration of 18- to 34-year-olds has implications for jobs in the hospitality and leisure industry, which are more typically held by young people, Schwartz said, but the number of people ages 35 to 45 in The Valley "has increased substantially over the past two decades," he said, and that age group—which usually consists of families with young children—is reflected in increasing or steady enrollments at Waitsfield, Warren and Fayston elementary schools at a time when school enrollment is decreasing statewide.

"We have to think about why we're losing young people," Schwartz said, but on a more positive note, "why are we attracting older people?" Those questions and more will be addressed at the economic summit this summer.