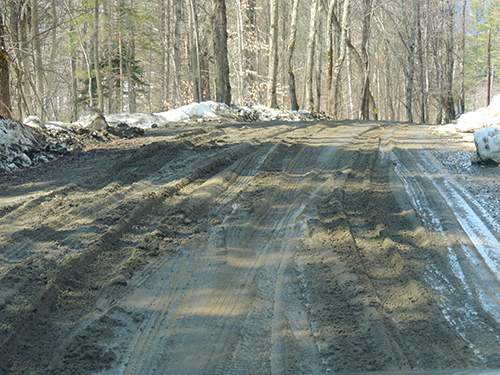 The transition from winter to spring in The Valley makes driving down a road like dodging darts in a video game, as cars must be constantly on the lookout for potholes and frost heaves.

Extreme cold temperatures followed by a few periods of warmer weather have caused damage to the roads that's "more significant than in the past five years," Warren road foreman Rae Weston said, although "we haven't seen the full impact of what the winter's done yet."

"I'll be curious to see how the road lays back down once all the frost comes out," Waitsfield road foreman Rodney Jones said, referring to the melting of heaves that have formed on paved roads due to water freezing and expanding under their surface. Jones' crew has already been filling potholes for the past few weeks, as they've thawed out.

And while drivers have been dealing with tough driving conditions on paved roads this March, getting down dirt roads will be much harder in the coming month, as the ground softens with warmer temperatures.

"We're praying for the frost to come out of the ground slowly," Jones said, but "we could be looking at the worst mud season we've seen in a while," Jones said.

Weston expects mud season this year will at least be worse than last year, "but we're already into April, so maybe it will be short-lived," he said.

As far as maintaining dirt roads as they become rutted, "there's not a lot we can do," Weston said. Crews usually head out on nights when it's expected to get below 32 degrees and grade the roads before they freeze, "but it's only good for the next day, and then we do it all over again," Weston said.

"There's only so much you can do with mud," Jones echoed.

Really the only way to minimize damage to dirt roads over the next few weeks will be to avoid them. "If you can travel less, that's a good thing," Weston said.

For those who live on dirt roads, "use your own discretion," Jones said. The town will likely be posting roads closed to all but local traffic soon, "but just because a road doesn't say closed doesn't mean you should pound your car through it," he said.

As The Valley slogs through mud season, Jones urges drivers to "be patient." The road crews are working as hard as they can, but "it's spring in Vermont," he said.