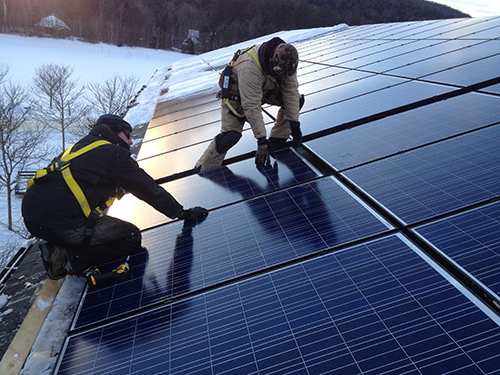 Waitsfield voters will head to the polls on Tuesday, May 6, to vote on a $306,000 bond for a solar installation that will make the town offices net zero and also provide electricity for the fire station, the Wait House, the school, the town garage, the library and potentially the street lights on Bridge Street.

Voting takes place at Waitsfield Elementary School from 7 a.m. to 7 p.m. and the town will hold an informational meeting about the bond vote on Monday, May 5, at 7 p.m. at the school.

Waitsfield is applying for a grant from Vermont's Clean Energy Development Fund. The maximum allowable grant amount is $125,000. Grant applications are due May 9.

The array will be constructed at the Waitsfield town garage (off Tremblay Road) and will feature 330 fixed panels. The solar array is a 102 kW array. It was downsized from the original proposal of 120 kW. The town is working with Nils Behn of Aegis Renewable Energy in Waitsfield on the project.

According to town administrator Valerie Capels, the project was downsized to avoid overproducing electricity which would simply accrue to Green Mountain Power rather than the town.

The project will take up 150 by 130 feet, or approximately half of a football field, and will offset about 90 percent of the total municipal load. As proposed the town will own the solar panel array and its life expectancy is 25 years.

The Waitsfield Select Board met with Behn at its regular meeting this week on April 28 to finalize details of the proposed array and the bond vote.

The project will make Waitsfield's new town offices completely net zero. Architect Bill Maclay had already been working on a highly energy-efficient building that will rely on an air-to-air heat pump for its heat. The electricity for that heat pump will be coming from the solar panels which will make the building one of the first, if not the first, completely net-zero town office building in the state.

The town is entering into a net-metering and financial agreement with Waitsfield Elementary School so that the school's share of the electricity is covered under the school's budget.

Currently the town's electrical costs (Wait House, fire station, town garage, new town office) are estimated at $9,575 per year. The library's electricity costs $2,105 per year and the school's costs are $14,125. All those electrical costs come to $25,805 annually.

"The select board unanimously supports the solar project and urges voters to express their support by supporting the May 6 bond vote. This is a positive project for the town that will reduce municipal energy costs and further demonstrate the town's drive toward sound energy choices for the future," said Waitsfield Select Board member Sal Spinosa.

On Tuesday, April 29, the Warren Select Board held a public hearing for the bond vote next week, which will ask taxpayers to approve $462,829—subject to reduction by grants—for the installation of a 162 kW solar array behind Brooks Field at Warren Elementary School.

The array would produce 165 kWh of net-metered energy a year and would offset about 88 percent of the town and town school district load. That's the equivalent to offsetting the energy used by about 27 New England households, explained Nils Behn of Aegis Renewable Energy, the Waitsfield-based company that would install the system.

The 522-panel array would occupy a total area of 45 by 500 feet split between two locations: a strip of land between the road on the far side of Brooks Field and the forest behind it, and another strip of land at the edge of the field within the town-owned Eaton Parcel. The array's interface would be "accessible by anyone on the Internet in real time" via a link on the town website, Behn said, and Warren Elementary School students could learn about renewable energy by analyzing the output of a system they can see from their classroom.

Since Behn approached the select board with the idea for the array last September, it's "gone through many, many iterations," he said, as he's worked with Warren to determine a size, location, and finance plan for the project that would have the best benefit to the town. Now, the board is asking voters to approve a 20-year bond for the array, which comes with a 25-year warranty for operating at least 80 percent of its original output. After 25 years, the panels will still operate but with decreasing efficiency, and the financing plan accounts for annual maintenance and equipment replacement costs.

According to Behn, the project will turn cash-positive after eight years, and Warren is also applying for a grant for up to $125,000 to install the array, which if received will serve as a buffer for the town during those first eight years. If Warren receives the grant, Behn estimates that over the course of the 20-year bond the town will save about $175,000 in energy costs, and even without the grant the project will have essentially no impact on taxes.

At last Tuesday's hearing, a few residents questioned Behn's output estimates for the array, which he explained take into account shading and local weather patterns. And even then, they're "very conservative," Behn said. "I'm not interested in over-promising anything," he said. "That's not the way to do business."

Still, the select board acknowledged that there are risks associated with the project. "You can argue this thing until the point that you kill it," select board member Bob Ackland said, but when faced with the increasingly negative effects of climate change, "everyone has to step up and do something," he said.

"This is environmental leadership," select board member Matt Groom echoed. "There are a lot of factors here. It's not black and white numbers," he said, "although I happen to think the numbers work out pretty well."

In installing the freestanding solar array, "we're actually risking very little," select board member Anson Montgomery said, compared to towns that sign off on renewable energy projects such as wind turbines, whose installation has an irreversible environmental impact. "Ten years from now, if we need to rip out [the array], we can," he said.

Still, not everyone who attended last Tuesday's hearing was convinced going solar was a good idea, as one resident argued that the environmental return on solar arrays is close to 60 years, due to the amount of resources needed to produce the panels. Behn responded that in Vermont, Green Mountain Power has to go out of state to buy power during peak hours while solar arrays produce power during peak hours, reducing the company's need to pay premium rates for unclean energy sources like coal.

"Green Mountain Power is very happy to have net-metered energy feeding through the grid," Dotty Kyle said, speaking on behalf of the Warren Energy Committee. "We've been very enthusiastic about the project from the beginning," she said.

Another resident said he supported Warren going solar, but "I think you let us down by not putting [the project] out to bid," he told the select board.

Ackland explained that the board made the decision not to put the project out to bid because Behn "initiated it himself," he said. In researching different options for the town, "he's done I don't know how many thousands of dollars of work [for us so far]," Ackland said, and Aegis Renewable Energy has won an award in a national competition that speaks to the quality and cost-competitiveness of their work.

In the end, "I would feel bad for Nils if he didn't get the job," Montgomery said, but it's important to remember that "we haven't awarded any contract," he said. "This isn't a done deal.... We are presenting this to the town for permission to go ahead."

Residents will be asked to vote on the array next Tuesday, May 6, between 7 a.m. to 7 p.m. at the Warren Elementary School.