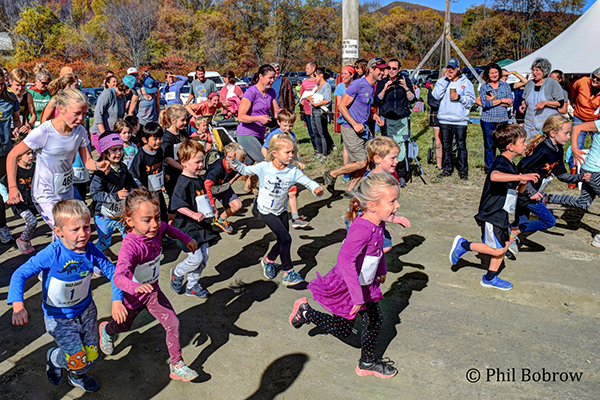 The sun was shining, the leaves were bright and the temperatures were perfect for the 24th annual Mad Dash. More than 500 people joined the autumn fun to run or walk the 5K or 10K course, including dozens of future racers in the Kids Fun Run. A benefit for the Mad River Path, the event was held once again on fields owned by Neill Farm off Meadow Road. The dirt road courses, farms, views, food and camaraderie bring people back to the Mad River Valley for this event year after year from around New England and as far as Minnesota, Wyoming, California and the Bahamas.

“The Mad Dash is truly a community-supported event,” said Mad River Path executive director Ross Saxton. “More than 50 volunteers make the event possible and nearly 125 businesses help make our fundraising efforts successful between sponsorships and silent auction donations. It’s hard not to feel a lot of love coming from all over the Mad River Valley and beyond this time of year.”

The races started off with the sound of the siren as the 10K racers went out to enjoy the course first. Five minutes later, the 5K runners and walkers began their event. First in for the 10K folks was Colin Rodgers, Waitsfield, in a very speedy time of 33 minutes and 59 seconds, which is an average of a 5:28 minute mile. Coming in six seconds behind Rodgers was Topher Gaylord, Warren, and a few minutes later was Jon Floyd of Waterbury Center for third place. Cathleen Balantic, Burlington, won the 10K women’s field with a time of 43 minutes and 1 second, averaging a fast pace of 6:55 miles per minute. Christina Hall of Plymouth, MA, and Karissa McDonough of Waterbury Center claimed second and third in the women’s 10K.

The 5K overall winner was Seth Jackson of Montpelier crossing the finish line in a quick 17 minutes and 22 seconds, and Kate Currie of Holliston, MA, took first place for the women’s 5K in 20 minutes and 36 seconds. Carlton Cummiskey of Warren finished in second place and Luke Groom, also of Warren, took the 5K third place. The women’s 5K second- and third-place finishers were Paige Joyce of Plymouth, MA, and Kasandra Reid of Montpelier with times of 21 minutes and 26 seconds and 21 minutes and 57 seconds, respectively.