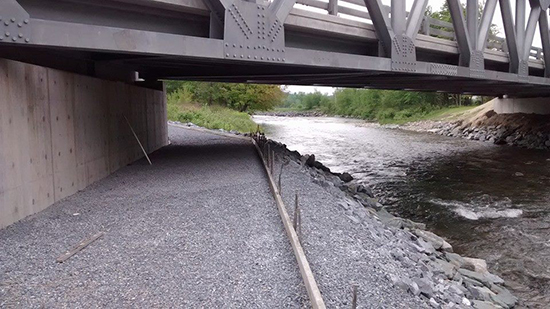 As S.D. Ireland finishes up its replacement of the Kingsbury iron bridge over the Mad River on Route 100 in Warren, the contractor also completed an underpass that connects two sections of the Mad River Path.

"The underpass connects our trail that goes around the Sugarbush snowmaking pond to the Kingsbury Greenway that goes to the south from the bridge to Riverside Park," Flender said.

Prior to the underpass, the Kingsbury Greenway came down along the river, behind the Golden Lion, over a path association bridge, over Chase Brook and then people had to cross at grade to a bend in Route 100 on the Warren side of the bridge.

"It wasn't as safe as you'd want it. The original idea was that you could get a safer crossing situation there," Flender said.

Prior to the VTrans purchase, the path association did not have an easement over that portion of land.

The cost of the bridge replacement project including the underpass was $3,522,363. Per the terms of the contract, the work is to be completed and the Sugarbush snowmaking pond parking area and site returned to its previous condition by June 13.