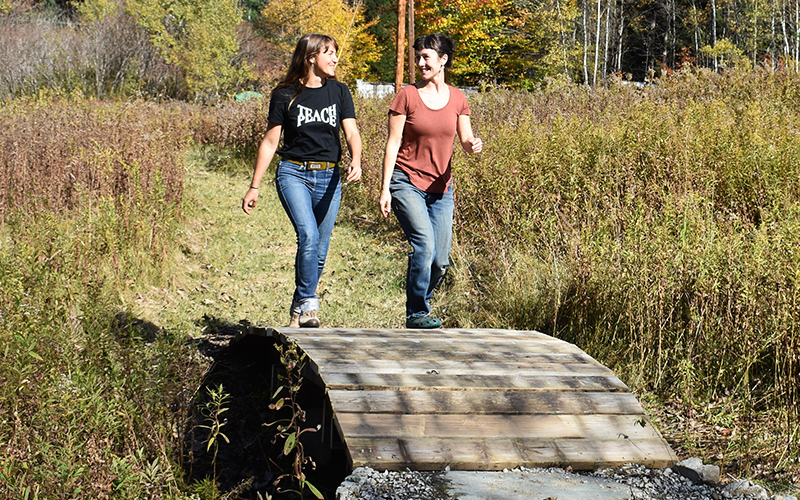 A new 1-mile section of the Mad River Path will be constructed behind and uphill from the Yestermorrow Design Build School in Waitsfield this summer.

“We’re just waiting on Yestermorrow’ Act 250 permit to be amended and we can get started. The application to amend the permit was completed a couple of months ago,” said Ross Saxton, executive director of the Mad River Path. Once the Act 250 permit is in hand, Mad River Path will seek a conditional use permit from the town of Waitsfield.

The trail will be a lollipop loop that runs uphill from the back of the campus, makes a loop and returns with the descent the same as the ascent. It starts up an old logging road and the steepness of that road will be softened with switchbacks, but not 180-degree switchbacks, rather, rounder ones according to Saxton. It will be a multi-use trails suitable for hiking, biking and running.

As part of the permitting process Saxton consulted with the Vermont Fish and Wildlife Department as well as the Department of Environmental Conservation about what restrictions and conditions would need to be part of the new trail.

“This parcel is part of a deer wintering yard so the trail won’t be open from December 15 to April 15. We’ll include signage so people know why to stay out of deer yards in the winter, especially in bad winters,” Saxton explained.

The new Yestermorrow trail segment is linked to other sections of the path including the Sugarbush snowmaking pond loop and a segment that runs across the Kingsbury Farm.

Saxton said that Joe Bossen, owner of the Kingsbury Farm, had recently planted 100 apple trees along the path section that runs through the farm. North of Mac’s Market on another portion of Kingsbury Farm land is Mad River Path bridge that brings people over the ditch and onto Route 100 where they can cross to a mowed path on Yestermorrow’s campus.

Saxton said the new trail section has some very beautiful spots where there will be benches placed. He said it was a good place for birding and that there were nice hardwoods in the new section.

“While I was up there few weeks ago, I saw fresh moose tracks. In early spring and late fall when there are no leaves, there will be nice views across to the hillside across The Valley,” he reported.

Saxton and Mad River Path trail manager David Hodgson will manage most of the construction with some help from volunteers.

“There will be a couple of bridges going in and we’ve talked to the Department of Environmental Conservation about where the landings can go, on each side, to make sure there’s plenty of room for perennial streams. We’ll probably need some help pulling lumber up there,” Saxton added.

Saxton said that the construction style of the new bridges would match the progressive architectural style of Yestermorrow.

“They may not be the most conventional design, but they’ll match Yestermorrow’s style. Yestermorrow built the bridge over the drainage area that leads across Route 100. It’s a cool arch bridge with stone foundations,” Saxton said.

He said that the lumber costs for the project would be less than $1,000 and said that they’d try to use reclaimed and local lumber when possible. The project will take fewer than 200 hours of staff time plus volunteer hours, he said.