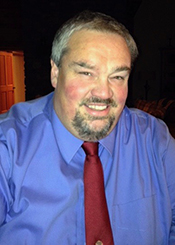 Gregg L. Haskin, 54, of Berlin, VT, died unexpectedly on June 6, 2018, at his home in Berlin. Gregg was born May 15, 1964, in Montpelier to the late Eleanor (Farr) and Dana L. Haskin Jr. Gregg was a 1982 graduate of Harwood Union High School. While in high school he discovered an interest in accounting and went on to attend Bentley College in Waltham, MA. All through high school and college Gregg worked at the family business, Waitsfield and Champlain Valley Telecom, alongside his parents, brother and sister, assisting installers, line crew, splicers or helping at the central office. Early in 1999 he became controller of the company and eventually chief financial officer. He often called his co-workers at the company his “telephone family.”

Gregg had many hobbies and interests. He attained the rank of Eagle Scout in Troop 100 of Waitsfield, obtained his private pilot license, enjoyed golf, volunteering for animal rescue groups, going to camp, family events, his beloved Patriots and traveling, especially to Las Vegas. However, his true passion was cars. What started out as “mud bogging” evolved into a professional racing career and Gregg and his vehicle “Risky Business” made numerous appearances in televised races on TNN and ESPN. More recently he discovered drag racing and was in the process of building a top sportsman car to race at NHRA events. Gregg spent many happy hours with his pals in his garage shop.

On September 8, 1996, he married his wife, Roberta. At first they resided at the Haskin camp in East Warren and moved to Berlin in 1997. Gregg and Roberta had a common love of animals that resulted in many cats and dogs becoming their fur babies over the years. They enjoyed their home, having friends and family to their camp, regular trips to the Outer Banks of North Carolina and traveling.

Gregg is survived by his wife, Roberta; brother, Eric (Anna) of Waitsfield; brother, Scott of Florida; nieces and nephews, Kianna Haskin, Samantha Simms, Shannon Simms, Derrick Haskin, Michael Simms and Jacob Simms; uncle, Father Jay Haskin, and aunt, Ann Haskin Ways; as well as his extended family of brothers and sisters – in-laws, nieces and nephews and many, many friends. Gregg was predeceased by his sister, Susan Haskin Simms, on July 14, 2003. He will be missed by his loyal companions Cheddar, Biscuit, Brie and Manny.

Funeral services will be held from Waitsfield United Church of Christ on Thursday, June 14, 2018, at 11 a.m. with a reception to follow at Waitsfield Telecom. Interment will take place in the Waitsfield Village Cemetery. For those who wish, memorial gifts would be appreciated to the Mad River Valley Ambulance Service, P.O. Box 305, Waitsfield, VT 05673, or to Good Karma Rescue, 75 Brigham Lane, Essex Jct., VT 05452 (www.goodkarmarescue.com). Assisting the family is Perkins-Parker Funeral Home and Cremation Service in Waterbury. To send online condolences visit www.perkinsparker.com.