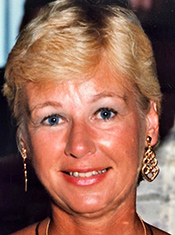 Louise Mae (Burrill) McKenney, born on October 20, 1938, in Morrisville, Vermont, to the late Evelyn (Burbank) Burrill and Dean Burrill, passed away peacefully at home at age 79 on September 12, 2018, in South Burlington, VT. She grew up in Island Pond, VT, attending school there as well as in Ottawa, Ontario. Louise is survived by her daughters, Susan (McKenney) Klein (and Karl Klein) of Fayston, VT, and Sharon (McKenney) Roy (and Alain Roy) of Derby Line, VT; grandchildren, Kailey (Roy) Bentine (and Werther Bentine-Torres) , Jordan Roy, Chantel Crawford, and Craig Crawford, as well as two great-grandsons, Parker and Liam Bentine. She is also survived by her sister-in-law, Joan Watson of Island Pond, VT, of whom she was very fond, and nephew Wally Watson of Newport, VT. A private burial will be held in Bangor, ME, at the convenience of the family.