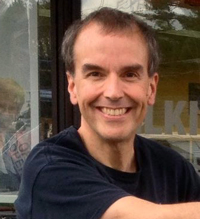 Anthony F. Amenta Jr. (Tony), 57, of Waitsfield, died peacefully on September 29, 2018, at home. He was diagnosed in August 2017 with advanced gallbladder cancer. Tony was born in Middletown, Connecticut, on April 18, 1961, to Priscilla (nee Jackson) and the late Anthony F. Amenta Sr. He graduated from Glastonbury High School in 1979 and earned a bachelor's degree in 1983 in history and political science from St. Michael's College, where he formed many lasting friendships.

After college he lived in Warren and then moved back to Connecticut, where he met Peggy McGrath in 1987. They lived along the shoreline in Old Saybrook and Guilford, and Tony got into sailboarding. He worked in various jobs including as a sailmaker and in sales and distribution of sailboarding gear and snowboards. Tony and Peggy moved to Waitsfield in 1999 and were married on August 10, 2017, after 30 years together. He was employed by Small Dog Electronics for 17 years and most recently by Cabot Creamery Co-Op at the Waitsfield offices.

Tony was a lifelong skier and snowboarder. He was on the Catamount Trail Association board of trustees and was a volunteer trail chief, maintaining a section in Phen Basin. He is a past member of the Mad River Ridge Runners snowmobile club, serving one year as president. And he was an avid cyclist, often attending events and organized rides, and he especially liked mountain biking. He served on the Mad River Riders board of directors. Tony always volunteered on trail work days with all of these clubs, and his dedication to trail maintenance was recently recognized with a Blueberry Lake mountain biking trail named for him, Amenta's Way.

Tony had a great appreciation for music and enjoyed recording live music. He could be found camping at bluegrass festivals or in the tapers' section at Grateful Dead and Phish shows, to name a few. He liked riding Harley-Davidson motorcycles and rode to Laconia Bike Week (New Hampshire) and Sturgis Motorcycle Rally (South Dakota). He was outgoing and always trying new things, making friends with every new interest.

Tony is mourned by his wife, Peggy McGrath of Waitsfield; his mother and stepfather, Priscilla and Alfred Reylek of Middlebury; his brother, George Amenta; aunts and uncles, Ann Amenta, Ted and Natasha Amenta, George and Shirley Jackson, and Fred and Nancy Jackson; many cousins; his in-laws, the McGrath family; and many great friends.

Tony wished to be cremated and no formal services are planned. In lieu of flowers, those who wish may make a donation in Tony's memory to a charity of their choice or to Bravehearts - Friends of Dylan Connelly, a memorial bike ride that Tony attended annually, raising funds to help people diagnosed with cancer and their families (www.braveheartsfodc.com).