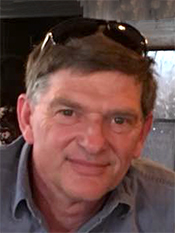 Scott Henry Slager, 60, passed away peacefully on Friday, October 26, 2018, at home with his wife and sister by his side. Scott was born in Rochester, NY, on September 3, 1958, to Sally Ray (Scamp) and Robert Allen Slager. Scott married Amy Herrick MacDonald on August 21, 1993, in Manchester, Vermont.

Scott is a graduate of Naples High School in New York. He began working at Bristol Mountain as a teen, which led to his career as a ski lift mechanic and welder. He also worked at Mountain High in California, Bromley Mountain in southern Vermont, and he retired from Sugarbush Resort, Warren, VT, in February 2018.

Scott was a lifelong skier and loved being out in nature in all sorts of weather. His job enabled him to experience sunrises, beautiful views and special moments with wildlife. Scott also loved bowling, camping, golf, horse racing, football, soccer and spending Friday nights with his poker buddies.