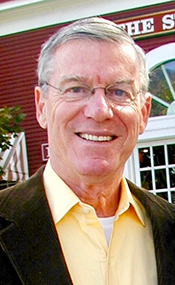 Clayton P. Cormier, 87, of Warren, VT, former president and CEO of Ancon Insurance Co., a subsidiary of Exxon Mobile Corporation, died peacefully on Tuesday, June 9, 2020, in Jupiter, FL. He died after a brief illness and was surrounded by his beloved family. He is survived by his partner and husband of 27 years, Brian A. Gurney; his children by his first wife, Gretchen Schoenhof -- Clayton-Paul Jr., Karen and Jane Cormier; his stepchildren by his second wife, Judy Cormier – Chris Nicholls and Jamie Nicholls Biondi; and his siblings Curtis, Michael, Kathy and Claudette. His twin sister Claudette died less than 48 hours after his death. His brother Mark predeceased him in 2006. He is also survived by his five grandchildren, Naomi, Maya, Enzo, Kaia and Yuma as well as his extended family in Maine and Hawaii.

Clayton P. Cormier was born in Bay City, MI, on October 9, 1932, to Clayton Edmund and Thelma Curtis Cormier. After graduating from Bay City Central High School, he received his BBA and MBA from the University of Michigan. In between his undergraduate and graduate degrees, he was drafted into the U.S. Army, where he proudly served for two years including as a supply records specialist near Frankfurt, Germany.  After receiving his MBA in 1957, he joined the Standard Oil Co. in New York as a financial analyst in the treasurer’s department. In 1961, he was promoted to a senior foreign exchange analyst with Esso International and relocated to Caracas, Venezuela. In 1965, he became treasurer of Esso and subsequently returned to New York City in 1969 as treasurer of Exxon International. After his promotion to assistant treasurer of Exxon Mobile in 1973, he was promoted to president and CEO of Ancon Insurance Co. S. A., relocating to Hamilton, Bermuda, in 1979. After a 28-year career with Exxon Mobile, he returned to New York City in 1985 to lead a new oil and gas department at Johnson & Higgins.

After his retirement from the oil and gas industry, Clayton went into the antiques business with his partner Brian Gurney. They ran Smith Gurney Antiques Ltd in New York City and later moved the business to Warren, VT. He was actively involved in every community he lived in and held many directorships, board positions and volunteer roles over the span of his career. These included a board position at the Bermuda Institute of Ocean Sciences, a directorship at Veritas, a board of trustee chair at the Vermont Folklife Center and as president of Ski Club 10 in Warren, VT.

He thrived in all of his communities with his gentle demeanor, intelligence, kindness, smile and love for life. He loved his family, his friends, his pets and his extensive library of books. His hobbies were reading biographies, skiing, playing tennis, skeet shooting and traveling. He was an avid art enthusiast and contributor to museums, including the Metropolitan Museum, Museum of Natural History, the Guggenheim and the Shelburne Museum in Vermont. He will be dearly missed by his large extended family and by all who knew him. A private memorial celebrating the life of Clayton and his twin sister Claudette will be arranged at a later date. In lieu of flowers, the family would appreciate a donation to the Mad River Valley Ambulance Service, 4177 Main Street, P.O. Box 305, Waitsfield, VT 05673.