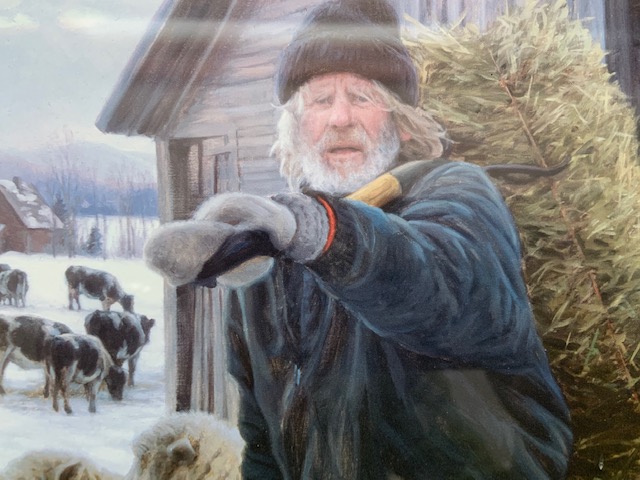 Last week there was a very short, simple obituary in The Valley Reporter noting the death of the farmer, Donny Joslyn, at age 91. In one way that was a fitting tribute, as Donny was a humble, hardworking, uncomplicated person, but in another way it was woefully too short in marking the man and his imprint on The Valley.

Donny was the most interesting Vermonter I ever knew. All summer long he could be seen on the Common Road or East Warren Road driving his antiquated tractor to numerous properties he hayed – including ours. He had a tried and true system of ferrying the various implements he needed – mower, hay rake, baler, tedder and finally the hay wagon, back and forth. He needed all this hay for the eight-plus months that his cows could not graze in his fields. It has only been less than two years since he was unable to do his haying chores.

The picture above is classic Donny Joslyn. You could see him out twice a day on Common Road carrying hay bales with a pitchfork, one at a time, to feed his animals. As time went by it got harder and harder for him to walk and carry this weight. At one point he rigged up a sled that he could pull instead, by hand, and then behind his tractor. But then even that became too much for him.

Donny lived a hardscrabble existence and never had a day off. For most of his farming career he was a one-man band working from sun up to sun down. His nephew and friends came to his aid in the last few years as he was failing. He rarely sought help and didn't expect help from anyone, but always expressed his gratitude for that help. Donny had virtually no reliable, modern equipment. He shoveled all the manure by hand – three times. Once into a wheelbarrow and then dumped out of the barn into a pile, once from the pile into a wagon and then from the wagon spread by hand out onto a field to enhance the hay crop. About 10 years ago he finally got a well-used manure spreader so he only had to shovel twice.

Not unlike many farmers, Donny suffered a number of serious injuries – leg, hip, head, ribs, hernias, etc. These were caused by hard work and often being kicked or knocked over by his bull. As he got older Donny had to simplify his workload.  About 10 years ago he sold his sheep herd. The birthing in the middle of the night, feeding, shearing, etc., just became too much for him. Not too long ago he still had a bull and 20-plus other cows. Slowly he whittled his herd down until they were all gone by the end of 2020. He stopped milking cows a long time ago, but still raised them to sell for breeding stock or beef.

It is hard to appreciate the utter lack of creature comforts Donny survived with for most of his life. For many years he had no running water, or at least no hot water when he did have running water. It is not clear when, if ever, he had sanitary plumbing in his house. He lived in a small portion of an extremely rundown farmhouse heated with a woodstove. He didn't have the time or money to fix it up. But he didn't seem to mind because that's the way it had always been.

Donny had an undeserved reputation as a mean, curmudgeon. While Donny did label his farm “Misery Manor” and had the saying “Abandon Hope All Ye Who Enter Here” written on his gate, this was just evidence of his dry humor. He had very poor eyesight and hearing. So as the many Common Road walkers passed him by and tried get him to respond to their greetings, Donny often didn't hear them or know who they were so he didn't acknowledge them – hence enhancing his reputation. Occasionally, if he knew who you were and he wanted to take a break from his work, he could entertain you for a long time with some funny stories and perspective on farming in The Valley.

It was difficult for a “flatlander” to become his friend. He was naturally suspicious of anyone who wasn't a farmer or at least an original or long-term Vermonter. He valued his oldest and best friends, like Lenord Robinson, George Robinson, Ned Kelly, Dorothy DeFreest, Frances and Wayne Kathan and others.

Donny made it through part of high school but he had to quit to help full time on the farm. He was very intelligent and kept knowledgeable about current affairs. He was also quite a Civil War buff.

He had the opportunity to sell a separate parcel he owned for more than enough money to live comfortably with a life of leisure in his remaining days. But Donny had no interest in sitting down. Farming and hard work were all he knew. He was featured in a Peter Miller photo storybook about old-time Vermonters. It may have been there that this anecdote first appeared. Someone was remarking to Donny about the many spectacular views visible from his property. His response mirrored his love and respect for the value of his land -- “You can't eat the view,” he replied.

Of course, Donny was not the only farmer in The Valley to live a hard life, but he may had led the most primitive existence. After Irene, the Mad River Valley Planning District commissioned a study and video on the viability of hill farming in The Valley. These document the history, the lives and challenges of our local farming community.  See https://mrvpd.org/wp-content/uploads/2019/07/MRVHillFarming-FINAL-Aug-6.pdf and https://vimeo.com/90008538.

Many people know much more about Donny than is captured here and it would be interesting if they would share their stories via letters to the paper or on Front Porch Forum.

Donny Joslyn loved his land, he lived his land and died in his easy chair in his house on his land – that's all he wanted out of life.