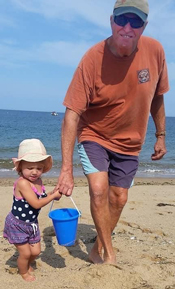 John Francis Guardino of Warren lost his short but courageous battle with an aggressive melanoma on June 14, 2021,at UVM Medical Center.

John, the youngest of seven, was born on March 18, 1955, in Queens, NY, to the late Louis J. Guardino, MD and Marie Guardino (Robertson).

He is survived by his beloved wife, Jeannie, whom he married in March, 1981. He also leaves behind his son JP of Truckee, CA, and daughter Kelly of Roxbury and her partner Christian along with two grandchildren, Halle and Sawyer; three sisters, Regina Henry of East Northport, NY, Diane Duplanty of Tucson, AZ, Jane Franco of New Port Richey, FL as well as brothers Louis of Boynton Beach, FL, and Alphonse of East Patchogur, NY, and the late Vincent of Chicopee, MA. John is also survived by many nieces, nephews, great nieces and great nephews.

While living in landlocked Vermont, John soon discovered that the outer beaches of Cape Cod had some really good fishing. As a self-employed woodworker, he realized that he had the flexibility to spend the summers in North Truro and took a job at Nelson’s Bait and Tackle in Provincetown. Working days was perfect because John was not a daytime fisherman. He fished off the beach at night, dusk or first light when the stripers were most likely to bite. As a woodworker, he decided to make his own wooden lures (called plugs). He always seemed to catch fish when no one else did. Soon after, everyone wanted the plugs made by “Vermont John.”

After the tackle shop closed, John spent a few summers working for the town of Provincetown where he planned to continue to work this summer.

John’s other passion was skiing. As his own children grew up, John realized that he missed skiing with kids and began working at Sugarbush as a Blazer coach. John’s philosophy was to make sure the kids had fun and they did. He was passionate about it and never missed a day of coaching in 12 years. He loved the kids and they seemed to love him as well.

John will be greatly missed for his sarcasm and dry sense of humor. Those who knew him could never understand how he could live in Vermont for so many years but still have that thick New York accent.

The family would like to thank everyone for their outpouring of love and support both here in The Valley as well as the North Truro community. A celebration of John’s life will take place in the fall.