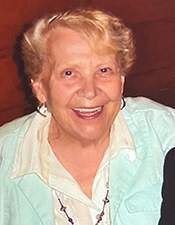 She was the daughter of Roy E. and Mildred (Downer) Long.

Gloria was born upstairs at the Warren Hotel, later known as The Warren Store, owned by her parents for 45 years.

As a little girl Gloria worked there standing on a milk crate making change for customers. That was the start of her becoming a fun-loving people person.

After raising her seven children, Gloria began a fun-filled job working at Green Mountain Coffee Roasters in Waitsfield. She greeted everyone with a smile as she handed out coffee, sold coffee machines and gave free cookies to The Valley’s children along with a great big hug.

Her children and grandchildren were her No. 1 priority, but animals, dancing, music and gardening were also close to her heart.

She maintained her quick wit right up to the end.

She loved so many and was loved by many more. She will be sorely missed.

A celebration of life will be held in the spring to be published at a later date.