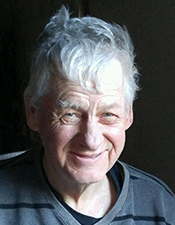 Albert Raymond “Bert” Blaisdell, 75, formerly of West Woodbury, died January 23, 2022 at home in Warren in the company of his loving family.

Albert was born September 6, 1946, in St. Johnsbury, the son of the late Andrew and Margaret (Feeley) Blaisdell. Over the years Bert worked with his father and uncle logging. He was a true woodsman and loved nothing more than to be in the woods with his bow and saw cutting up wood and conversing with the squirrels and chipmunks. He felt a real kinship with all animals even his friends the bears. Albert also worked as a farm hand from time to time and loved the farm animals as well.

Albert was from a very small family. He loved his favorite uncle, Albert Feeley, with whom he spent a lot of time as a youngster. After the passing of his family, Albert moved from place to place for a number of years until he landed in the middle of a large family farm in Warren that he would choose to be his own. He lived with the Robinson/Gioia family for the next 20 years until his passing. He was truly loved and appreciated for his kind nature and generosity of spirit. Albert could light a room with his smile and will be missed by all who had the privilege of spending time with him. In spite of the many hardships he encountered in life, Albert was truly an example to all of us in finding joy in the little things in life. His infectious laugh will live on in our memories forever.

Albert had a very strong work ethic. He would do anything for anyone and especially enjoyed shoveling snow, mowing the lawn and in general helping with whatever was needed. He took a special interest in looking after his friend and housemate, Julie, helping her come out of her shell and sharing laughter.

Bert’s favorite sport was bowling. He bowled at least once a week for the last 20 years and had many trophies to show for it. He also loved to shoot baskets and although he didn’t play football he was always one of the guys sitting on the couch cheering for the Patriots.

Services will be held later in the spring with date and time to be announced. He will be buried next to his parents in the Fairview Cemetery in Hardwick.

In lieu of flowers, please share a little happiness with a child or an older person in his memory.

Online condolences are welcomed at: northernvermontfuneralservice.com.