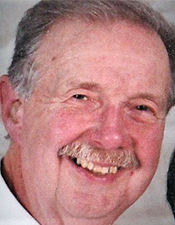 Karl graduated from Northfield High School. He worked at the Sugarbush Resort as a young man, he later moved to Burlington, were he worked for G.E. and then Shelburne Industry. Karl was a Scout Master in the South End of Burlington for many years. He was an active member of the Civil Air Patrol.

He was a member of the Maranatha Christian Church while living in the Burlington area, and he was an active member of the Hunger Mountain Christian Assembly in Waterbury Center.

Karl loved to travel; he and Sharon would take the train to Colorado to visit his brother and his family on the way meeting people from all over the country. In 2002, he and his family returned to Warren. He enjoyed the outdoors, spending time in the woods in and around the Mad River Valley, after Karl retired his love was keeping the lawn mown.

Funeral services will be held at a later date at the Hunger Mountain Christian Assembly Church in Waterbury Center. For those who wish, memorial contributions in Karl's memory can be made to the Hunger Mountain Christian Assembly Church, P.O. Box 188 Waterbury Center, VT 05677. To send online condolences visit www.perkinsparker.com.