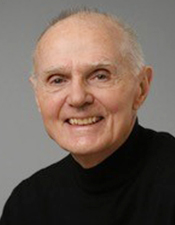 David was born in Ithaca, NY, to Alfred and Louise Schneider.

Beloved husband of Paula nee Edelberg, father of David Jr. (deceased), Drew and Todd (and Debra), brother of Gary and Richard (and Karen), uncle to Kristen, Lauren, Lindsey and Leigh.

Graduate of Syracuse University with a BFA and completed ROTC and entered the Army.

He was an avid skier and racer. He coached many young skiers that eventually made the U.S. Ski Team and went on to the World Cup and Olympic arenas.

He was an award-winning creator of Medical Direct, a direct mail agency that he started while living in Waitsfield, VT, which he ran as owner and president for over 30 years.

He was an amateur DanceSport competitor for 20 years and coached the SASS University of Vermont Ballroom Dance Team for many years.

He also authored a young adult book “THE SNOWY” which he wrote during his last years.

Many thanks to Dr. Paul Unger and staff, UVM Hospice and The McClure Respite House for their wonderful care.

Due to the current COVID situation, there is no planned services at this time. Any donations to cancer research would be appreciated: https://www.cancer.org/research.html