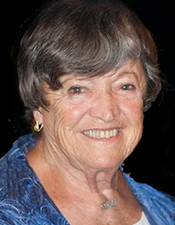 Susan M. Anderson (Orrico), passed away peacefully with her family by her side on March 29, 2022, at St Patrick’s Manor in Framingham, MA.

Born in Worcester, MA, on May 7, 1925, into a large family of six siblings, Sue was the daughter of Italian immigrants. After completing Worcester North High School, she worked in retail and as a clothing model before marrying Louis Anderson and settling in Worcester to raise a family. They later moved to Holden, MA, and after their two sons graduated from high school, moved to Vermont in 1969 after purchasing an inn at Sugarbush ski resort. Adopting to the innkeeper’s life, Sue was hostess and manager, donning a dirndl in the mornings to serve guests their breakfast. They sold the inn in 1974 moving to their home in Fayston, VT, where they lived for over 40 years.

Sue was always active and social, enjoying skiing in the winter, tennis and sailing on Cape Cod and Lake Champlain in the summer, and her beloved knitting group. Sue was a person of faith and very active in Our Lady of the Snows Catholic church, teaching Christian doctrine to the children and as a Eucharistic minister, bringing Holy Communion to the sick and elderly. Sue had a sense for those in need and a desire to help, delivering Meals on Wheels, as well as joining in other volunteer activities. She adored her children, their spouses, grandchildren and nieces and nephews and always opened her home to family and friends. Sue had a special place in her heart for her two grandchildren, Victoria and Nathan, and loved it whenever they visited.

Sue and her husband Lou left The Valley in 2014 to join the assisted living community at Golden Pond in Hopkinton, MA, where her husband eventually passed. Sue later moved to St. Patrick’s Manor in Framingham where she passed away peacefully surrounded by family. She is survived by her two sons and their spouses, John Anderson (Kirsten Anderson) of New York City, David Anderson (Sally Yozell) of Washington, DC; grandchildren Nathan Anderson (Heather Tellier) of Milton, MA, Victoria Anderson of Duxbury, MA; and several nieces and nephews including her niece Barbara Jean Brignola who cared for her during the past several years.

A funeral mass will be held Monday, April 25, at 10 a.m. at Our Lady of the Snows in Waitsfield, followed by burial services at the Bragg Hill Fayston Cemetery. A reception celebrating her life will follow at the Lareau Farm Lodge from noon to 3 p.m.