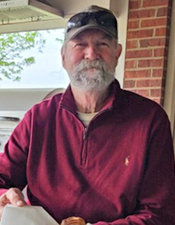 Michael Dennis Folsom, of Newburgh, NY, died in the early hours of January 30, 2022, only one month after his diagnosis of gastric adenocarcinoma. Michael was born on April 2, 1943, in Barre, VT, to Guy Boyce Folsom and Harriet Hepzibeth Mariah Jane Adams Spooner (Michael liked listing all her names). They were hardworking folks, Guy (Pappy) was a lumberman, hauling trees with draft horses and later worked in a nearby factory. Harriet (Mammy) worked as a chef in several restaurants and finally owned her bakery business in Northfield, VT, for many years.

Michael was the middle of nine children: Constance, Lawrence, Vivian, Marianne, Steven, Evelyn, Mark, and Richard. The Folsoms gathered often to celebrate birthdays, weddings, and holidays that were full of laughter. His teenage years were spent working on various local farms, including one owned by his uncle, Ike; all while attending three different high schools in four years.

In 1965 he enlisted in the U.S. Army and was deployed to Vietnam. Upon his return, he earned his B.S. in mechanical engineering at the University of Vermont in 1972, while concurrently working full-time and restoring his first home.

After college, he worked for General Electric in Burlington, VT. In 1979, he married Manja Yirka and in 1981, they moved to Frankfurt, Germany, for five years of adventure. There he worked as a project manager for the U.S. Army Corps of Engineers. During this time, his beloved three children Alexander (Sandy), Simon, and Mariah were born.

In 1986, he transferred to the U.S. Military Academy at West Point, NY, where he worked as a mechanical/ structural engineer until 1996. He spent his off-hours participating in the Blooming Grove Adult Volleyball league, where he made long-lasting friendships; and restoring a Victorian-era farmhouse in Washingtonville, NY, with help from his family and friends. He lived in true Vermonter fashion, preferring to repair rather than replace.

In the years that followed, Michael and his faithful canine companion, Monk, sought warmer climates, including Costa Rica and the Monterey Bay area in California where they lived for several years. Making his way back to the Hudson Valley, NY, in 2012, Michael was able to be closer to his immediate family.

Michael often told colorful stories of his misadventures hang gliding off Mt. Mansfield, waterskiing Lake Champlain, and racing in road rallies over dirt roads across North America. His love of motorsports resulted in family road trips that were more eventful than strictly necessary, but he somehow rarely got a speeding ticket.

Michael was a true environmentalist. If he saw a piece of rubbish on one of his many walks, he would pick it up. His two favorite phrases were, “This is the best day of my life” and “I’m the luckiest man in the world.” Though he was an accomplished engineer, creative storyteller, crossword specialist and inventive scrabble player, he will be best remembered for his warmth, generosity, and playful nature. He was a gentle giant. In the words of a dear friend, “Earth seems a bit dull without him being around!”

He was predeceased by his parents, his first wife, Barbara Ferber, their baby Andrea, and his brother Steven. He leaves behind his children, Sandy, Simon and Mariah, his "lovely ex-wife,” Manja, his siblings, many cousins, nieces and nephews, countless friends, and a feline, named Contessa, who recently entered his life and refused to leave him.

Donations toward memorial expenses may be made via PayPal directly to paypal.me/myirkafolsom.

Michael’s ashes will be dispersed in places he was fond of. A memorial and inurnment will be held at Irasville Cemetery in Waitsfield, Vermont, on July 23, 2022, at 10 a.m., and a celebration of life will be held at a date to be determined.