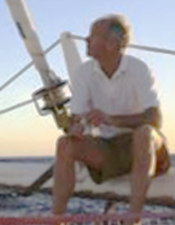 John Hudson Osgood, born July 9, 1940, lived an imaginative, considered and just life. He was a writer, photographer, athlete, thinker, professional real estate developer, an avid and accomplished pilot and sailor. He grew up in Marblehead, Massachusetts, and had a passion for the coast of Maine, particularly Penobscot Bay. One friend remembers John, “I loved John as my Renaissance friend -- he could do everything and do it so well.” For his children, he offered an expansive sense of life and opportunity, honoring their desires to be themselves.

He leaves behind his sister, Alison Osgood Fowler, of Marblehead, MA, and brother, Peter Osgood, of Sarasota, FL. He was pre-deceased by his parents, Robert and Eleanor Osgood, brothers Robert Osgood and Richard Osgood, and leaves his cousins, Chris Osgood of Lincolnville, ME, Tom Osgood of Santa Fe, NM, and dear friend, Betsy Morrell of Lincolnville, ME. As a parent, John leaves his daughter, Ana Osgood of Los Angeles, California, his son, Adam Osgood of Vinalhaven, Maine, his daughter, Kathryn Osgood of Washington state, and beloved stepchildren, Katharine Cahoon, Meghan Cahoon, and Nathaniel Cahoon. He leaves his much beloved wife, Frederica Chapman of Hope, Maine.

“He was a wonderful human being and the people who met him were lucky to have done so.” John died peacefully June 27, 2022, at Penn Bay Hospital, Rockport, Maine. Many thanks to the Palliative Care team and Sussman Hospice House. A Celebration of Life will be held August 21, 2022, in Lincolnville, Maine.