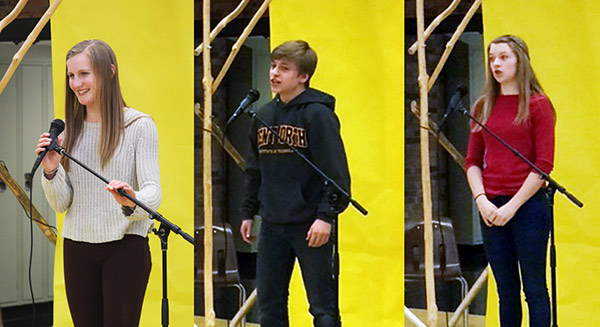 Ben White performs his poem “Memories” as prompter Jacki McCarty follows along, during the Recitation Showcase at the Celebration of Learning. Photo: Brian Wagner.

Nina Kellogg adjusts her mic before reciting “If” by Rudyard Kipling at the Celebration of Learning. Photo: Sam Krotinger.

On Thursday, April 11, the Harwood Union Middle School eighth-grade team held its annual Celebration of Learning, an opportunity for students to share their work with their families. Students performed memorized poems and demonstrated the function of their Rube Goldberg inventions. Guests were also invited to browse through the Vermont History Day projects, projects from Spanish classes, and an Independent Reading Booth where parents could look at new YA titles and take home suggested summer reading lists for students, courtesy of Harwood librarian Megan Reed.

The evening began with a showcase of volunteer poetry performers with classic or epic poems to share. These students performed their pieces for the entire audience before the rest of the student performers split into smaller groups to perform within classrooms. Recitation showcase performers included Allie Brooks, Claudia Derryberry, Grace Heller, Izzy Hubble, Anna Kudriavitz, Nina Kellogg, Maia George, Danielle Shea, Ben White and Wanda Sullivan. In all, 65 students performed on Thursday evening for parents and guests.

Posters of the poems that students recited lined the walls, written in the students’ handwriting, and included an analysis of the piece (including why they chose the poem) and a symbol to represent the chosen poem. Some of the stories behind poem choices were touching; one student said her grandfather had asked her to memorize her chosen poem years ago, but she had not thought of it until this assignment. Another student chose “Nothing Gold Can Stay” because she heard her grandmother recite it, and while she was learning it her father told her the story of the family land once owned by Robert Frost himself! Yet another student recited a narrative poem that captured the story of his Great Uncle’s battalion during WWII. The meaning the students gave to the poems truly made them come alive for the audience.

Eighth-grade science students participated in the annual Rube Goldberg competition inspired by the 20th-century political cartoonist who created and drew cartoons depicting complex devices that perform simple tasks in indirect and often convoluted ways. In true Rube Goldberg fashion, students were asked to make a simple task much more complicated, testing their creativity and ingenuity. Materials were brought from home to construct the devices which were built at school over the course of the week in preparation for Thursday’s showcase. Guests enjoyed watching students demonstrate the operation (and sometimes dysfunction) of their contraptions.

On Saturday, April 7, Harwood Union eighth-graders submitted projects for Vermont’s National History Day competition held at Montpelier High School. The theme of the competition was “Conflict and Compromise in History.” All students showed off their work in front of judges, parents and peers. The competition was the culmination of weeks of research into a topic of choice around the year’s theme. Of the 18 who submitted projects, Lillian Cadwell won third place for her website on Japanese internment, Nina Kellogg won second place for her paper on the passing of the 19th Amendment granting women the right to vote, and Grace Heller and Wren Forbes won second place for their documentary on the Cuban Missile Crisis. The students’ second place finishes qualify them for the National Competition in College Park, MD, in mid-June. Vermont History Day projects were on display at the HUMS Celebration of Learning.

Harwood eighth-grader Skylar Platt was recently awarded an honorable mention in the Hildene Foundation Essay Contest. The contest, open to Vermont eighth-graders, honors the life and work of Abraham Lincoln. The introduction of the contest reads, “The concept of what it means to be a patriotic American can sometimes lead to heated debate. In his time, President Lincoln was viewed as both a traitor and a patriot. Many Americans, particularly those in the southern and border states, believed his actions to abolish slavery threatened their economic livelihood and flew in the face of the Constitution and their idea of American freedom.” This introduction helps put into context the prompt for this year’s contest.

Platt approached the writing prompt, “Describe a current or recent event in which the actions of the participant(s) may be viewed as patriotic by some and as unpatriotic by others. Discuss the differing points of view. What is your position and why?” by analyzing the actions of Edward Snowden in making public classified NSA information bringing into light issues of individual privacy. He will be honored at Hildene, a Lincoln family home in Manchester, Vermont in mid-May.