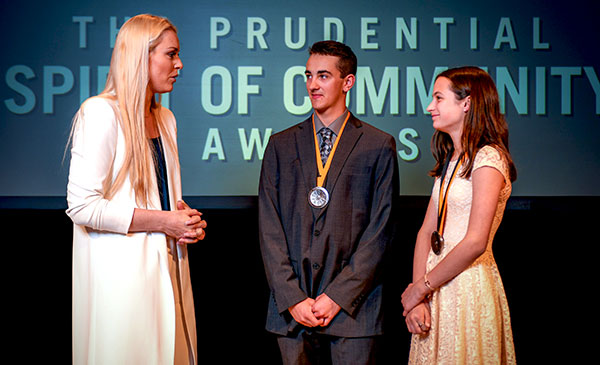 Samuel Grandfield, 18, of Waterbury, was named one of Vermont's top two youth volunteers of 2018, along with Ella Byers, 13, of Shelburne. They were honored in Washington, DC, on April 29 for their outstanding volunteer service during the 23rd annual presentation of The Prudential Spirit of Community Awards.

Grandfield, Byers and 100 other top youth volunteers from across the country each received a $1,000 award, an engraved silver medallion and an all-expense-paid trip with a parent to Washington, DC, for four days of recognition events. They were personally congratulated by Olympic gold medalist and World Cup champion Lindsey Vonn at an award ceremony and gala dinner reception held at the Smithsonian’s National Museum of Natural History.

Grandfield, a senior at Harwood Union High School, has volunteered for the past two years to help people in his community stay safe by serving as a junior firefighter for his local fire department. He was inspired to join the department by his former middle school teacher, who volunteered to fight fires despite a rare liver disease that ended up taking her life. “Her sense of duty and desire to help others is what motivates me to this day to help others and give back to my community,” he said.

As a junior firefighter, Grandfield had to learn about all of the equipment used in responding to emergencies, and he now has to train constantly to stay fit and maintain required skills. He has responded to numerous fires, ranging from small stove fires to large structure blazes, as well as several car accidents. Although he is not allowed yet to enter a burning building, he assists by managing fire hoses outside, directing traffic, and cleaning and maintaining equipment after calls.

Grandfield also has taught young people about fire safety at department open houses and helped clean chimneys for community members. After hearing about his experience as a firefighter, three of his friends also joined the fire department. “Being a firefighter isn’t just a project,” said Grandfield. “It’s a commitment to serve your community, to sacrifice for others.”